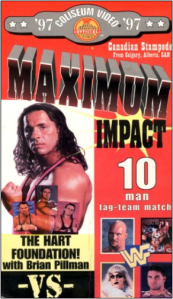 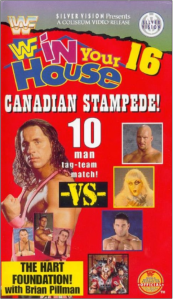 James Dixon: A famous show this one then, with wrestling fans across the land declaring it one of the finest pay-per-view events that the WWF has ever produced. We shall see what the HoW algorithm has to say about that! This is also notable for being the last two hour pay-per-view event that the WWF ran, and all others than followed have been three hours or more since.

Some have stated that this is the final show to be released under the Coliseum Video banner, but that is not the case. Nor is it the last “In Your House” event, as they kept the title for a good while after this, even if it did become less prominent, as individual catchy show titles took over. It was better back then, as the titles changed month-to-month and were tailored around what happened, rather than the backwards modern way of creating things unnaturally to fit a specific show type, like Hell in a Cell or Extreme Rules.

We are live at the Saddledome in Calgary, Alberta, Canada. It is a city that all wrestling fans are very familiar with, being the home of the Hart family. With this being smack bang in the middle of the USA vs. Canada rivalry between the Hart Foundation and everyone else on the roster, the focus is of course on the hometown heroes. The crowd is rabid. Vince McMahon, Jerry Lawler and Jim Ross all host, dressed as cowboys.

One thought on “In Your House 16: Canadian Stampede”