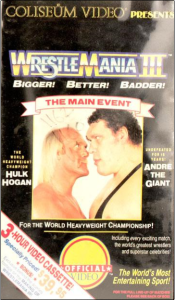 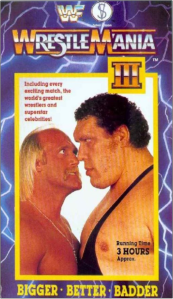 Justin Henry: Zane Bresloff’s finest hour? The Denver, CO-based events promoter had a sizable hand in boosting WrestleMania III’s attendance into the mythical 93,173 that WWE heralds as its magnum in-house audience. Later on, Bresloff would claim the capacity was closer to the 78,000 that skeptics and detractors use to challenge the 93,000+ claim, though this is a case where even wrestling historians hate putting the facts before a good story. The absolute sea of humanity surrounding the ring, most evident when the hard camera presses in to its craning extreme, was a tidal wave that could have claimed the lives of surfers off of Waimea Bay. 78,000? 93,173? Numbers are fact, but the image of that crowd triumphs over reality. It’s a metaphor for Rock-n-Wrestling: ‘surreality’ simply means ‘greater than reality’.

That flood of screaming masses was promised a match of epic element – Hulk Hogan’s three-year WWF Championship reign was never in more jeopardy than under the looming pillar of inpenetrable mass that was Andre the Giant. For that reason more than any other, Interstate 75 leading into Pontiac, MI congested as though the lure of Hulk/Andre were an all-encompassing meningitis. A few hours’ worth of road rage would surely be worth seeing the historic clash play out, one without a clear winner in the rounds of prognostication.

The SilverDome today lays in tatters, its roof completely gone. Photos circulating the web depict the former home of the NFL’s Detroit Lions as a cross between federal disaster area and an eerie ghost town, with various forms of debris covering the seats. Greek real estate developer Andreas Apostolopoulos purchased the SilverDome in 2009 for $583,000, ghastly low compared to the construction price of $55.7M in 1975 ($220M in 2009 dollars). Since Apostolopoulos’ purchase, the SilverDome has held a monster truck rally, a football friendly, and an HBO-broadcast boxing match, then began its slow fade into startling ruination.

For all walks of wrestling fan, WrestleMania III remains a spit-shined monument to a thriving kayfabe era, true heroes and villains contesting grudges and backing up pride before disputably the largest audience the company has ever pulled. Lower a statue that somehow depicts the event onto the field’s 50-yard line. While the rest of the stadium crumbles in abandonment, generational word of mouth will keep that artful monument sparkling.

One thought on “WrestleMania III”