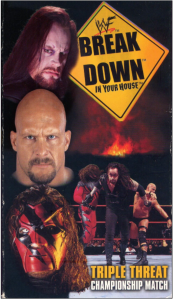 Arnold Furious: Vince McMahon had got full-on sick of Steve Austin being the WWF Champion (kayfabe) and therefore plotted to get the title off him. He’s stacked the deck against Austin this evening by putting Undertaker and Kane in a triple threat match against him for the title, where Taker and Kane cannot pin each other. It’s basically a handicap match. Any outside interference will also cost Austin the strap. Attitude is in full flow and there are signs everywhere. Compare that to just a year before where signs were a rarity. This is a crowd that’s totally into the product. We’re in Hamilton, Ontario, Canada. Hosts are Jim Ross and Jerry Lawler.

One thought on “Breakdown”