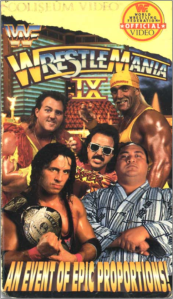 Arnold Furious: When discussing the worst Wrestlemania’s of all time, Wrestlemania IX leaps head-long into that conversation like Tom Daley coming off a high board. If you wanted to call Wrestlemania IX the outright worst Wrestlemania of all-time I certainly wouldn’t argue with you. There’s precious little to redeem it, after all. The outdoor setting and ‘Roman’ Coliseum atmosphere the WWF were trying for paid off and most of the best moments of the broadcast come from the lavish venue and different approach to presenting a show. I’m sure Kevin Dunn would hate it. No other WWF show looks like Wrestlemania IX. When the matches started, the show began to rapidly go downhill, although the cast of characters assembled here is perfectly acceptable. It’s not like Vince McMahon was short of talent. Bret Hart, Shawn Michaels, The Undertaker, Hulk Hogan, Mr Perfect, Razor Ramon and the Steiner Brothers are all on this show. Unfortunately none of those gentlemen are wrestling each other. Perhaps aware he had a wafer thin roster, McMahon spread his talent out. Taker found himself against the inept Giant Gonzalez. Hogan in a 20 minute tag match featuring IRS. Razor Ramon against Bob Backlund, a complete clash of styles. Even the big guns found themselves out of sorts. Shawn Michaels, who could get *** out of a tackling dummy, found himself opposite a real life dummy in Tatanka and Bret Hart got lumbered with Yokozuna. It was a dreadful card before the evening got underway and realistically only Luger vs. Perfect looked any good on paper from the eight matches on the released line-up.

It’s unfair to call Wrestlemania IX a total disaster as I’m sure Vince McMahon’s bank balance will attest. The WWF didn’t really start to hit hard times until the buyrates started dropping in 1995 and Ted Turner’s WCW started to hammer home their advantage with Nitro. Perhaps the viewing audience should have walked away from McMahon’s grand vision of Sportz Entertainment a few years earlier as their storylines and direction in 1993 was pretty dire. To begin with there was the question of the champion. Vince McMahon wasn’t keen on Bret Hart as a long-term solution to his main event problem but was happy to use the work-horse midcarder as a short-term fix between Ric Flair’s departure and the return of Hulk Hogan to the WWF’s fold at Wrestlemania IX. McMahon’s devious scheme was to have Bret drop the title to mammoth, monster heel Yokozuna only for Hogan to come in and finish the show by capturing the belt. This would have worked fine if there was a long term solution to this main event issue. In the end part-timer Hogan dropped the belt back to Yokozuna and it took McMahon another year to realise Bret Hart was an actual viable champion. Another fine example of Vince McMahon famously “listening to the audience”. As long as they persistently hate his product for a year. Then he might consider changing it.

The problems didn’t end at the top of the card and Vince had serious issues with his mismatched undercard. He had a mesh of hungry young talent who he couldn’t book right (Michaels, Razor, Steiners), silly gimmicks (Doink, Tatanka, Money Inc.) and freak-show attractions that only appealed to biggest rubes in the world (Giant Gonzalez, Yokozuna). This all stemmed from the steroid controversy the previous year and several top-line performers (Warrior, Bulldog) had disappeared because of their chemically enhanced physiques. McMahon found himself with a combination of names and gimmicks and beyond a select few he didn’t seem to know who was worth pushing and who was just a waste of time. He saw money in Lex Luger, one of the few clean muscular workers he could locate but was booking him as a Narcissistic heel who nobody cared about. There are times in WWF history where you look at Vince McMahon’s vision and wonder if he’d just lost control over the product. 1993 is one of those times.

The Royal Rumble 1993 had been the lead-in show for Wrestlemania IX and the warning signs were there that the WWF was not going to have a good year. The opening match saw the Steiners demolish the Beverly Brothers in an extended squash that ran over 10 minutes. The WWF’s idea being that their promotion was more competitive and therefore the Steiners couldn’t squash the powerful Beverly’s in the 2 minutes flat it would take to beat them anyplace else. The simple fact of the matter was the WWF didn’t have a tag team division to speak of so every would-be Steiners squash got drawn out and lasted far too long. The same will be true of Wrestlemania IX. Up next was Shawn Michaels vs. Marty Jannetty, a match the WWF were hyping as being a potential Match of the Year before the show only for Marty to turn up in sub-par condition and the former Rockers to rock out a ***1/2 match with less thrills and spills than expected. Jannetty was promptly fired, again, and a potential Wrestlemania IX re-match went out the window. Next was the turn of Bam Bam Bigelow and Big Bossman to stink up the WWF ring with a dour, plodding contest. Bossman could be forgiven for not wanting to put too much effort in as he was on his way out. Bigelow’s efforts did not get him a spot on the Wrestlemania IX card. Read into that as you may.

The one thing the WWF had done to create excitement in the Wrestlemania card was naming the winner of the Royal Rumble to be the number one contender for Wrestlemania. In any preceding year this could have been terrific for business and a great way to generate hope for an upcoming, potential babyface champion. Unfortunately that wasn’t in the works in 1993 and the first Rumble winner to claim an automatic title shot was Yokozuna. I remember being told the outcome of this match in school and bemoaning the fact that Yoko was so grossly overweight that no one could throw him out. It didn’t feel like an accomplishment for Yokozuna to win the Royal Rumble. Merely a reward for the many ‘all you can eat’ buffets he’d been to in the past year. So while the snowflakes created the image of a decent show when I reviewed the ’93 Rumble for The Complete WWF Video Guide Volume #2 (it scored a 62), the booking and the quality of the promotion in general was lacking.

We’re in Las Vegas, Nevada at Caesar’s Palace. It is a good venue, despite limiting the WWF to a 15,000 crowd, and I like the look of the event. What I don’t particularly care for is the sight of poor old Jim Ross in a toga, looking thoroughly miserable and forcing a fake smile as best as he can. For Randy Savage it’s just another day at the office. For Bobby Heenan it’s an opportunity to have fun but for Jim it’s taking his years of wrestling knowledge and turning him into another sideshow freak for the rubes to ogle on the Idiotbox. Ross got to host two PPV’s during this initial run, this one and King of the Ring 1993 where he elevated the product with some great calls and an excellent understanding of the tournament. After that he was bumped so Vince McMahon could call the PPV’s the way he wanted them called. JR ended up getting released from his contract before Wrestlemania X. It’s a real pity because that’s a PPV he could have sunk his teeth into. Not like this garbage.

The WWF doesn’t have much in terms of draws for Wrestlemania IX. Essentially they booked the show around Bret Hart vs. Yokozuna (a good, old fashioned heroic American, from Canada, against the evil Japanese monster, from Samoa) and the return of Hulk Hogan. As much as I like to deride Hogan and Hulkamania, he was still a draw in 1993 and indeed after that in WCW and during their nWo angle. But was he a credit to the company in the ring? No. Was he a credit to professional wrestling after lying about taking steroids, thus shattering his public image? No. Vince McMahon saw an opportunity to use Hogan for one last run, probably expecting him to disappear into TV movies and retire from wrestling. It was a slight miscalculation but on seeing the slimmed down Hogan of early 1993, it was a decision that was not only calculated but wise. The only major issue was Hogan’s lack of willingness to put someone over on his way out. The only man he wrestled in singles all year was Yokozuna and only put him over with outside interference. Bret Hart was particularly bitter about Hogan’s reluctance to do the time-honoured tradition of putting over his successor. Ironic, really.

Before Wrestlemania IX there was a dark match pitting Papa Shango against Tito Santana under his new guise as “El Matador”. Shango had been a decent idea, based on a voodoo priest and harking to Baron Samedi, Dr Kananga’s henchman in the James Bond film Live and Let Die. In all honesty the character could, and probably should, have become a great WWF Sportz Entertainer like the Undertaker but it didn’t quite pan out that way. Charles Wright was certainly dedicated to the character and gave it his all, getting authentic voodoo props and reading books on voodoo so everything he was saying was genuine. Wright himself blames Sid for Papa Shango not catching on as Sid backed out of a potential money-spinning feud with the Ultimate Warrior, on account of all the losses he’d accrue, and the spot went to Shango instead. So during the summer of 1992, Papa Shango was counting lights every night until he was just another guy. Eventually the WWF did throw him an Undertaker feud but that was strictly a house-show deal. By this point he’s completely dead in the water and loses to El Matador, a guy he was beating comfortably the previous year. Keeping in mind El Matador is one of the worst twilight years repackaging jobs the WWF have ever done (along with Tony Atlas as Saba Simba). It was a virtual insult. Tito would be gone by August, Shango by October. Santana could have coined in some serious dollar with a last big comeback run but ended up gone from the promotion and would never come back (aside from commentating in the late 90s).

One thought on “WrestleMania IX”