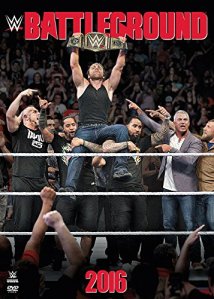 Arnold Furious: This is the first WWE PPV since the brand split and you have to suspect it was originally planned as the first RAW vs. SmackDown event, hence the name. Although the hype video at the top is just guys waving their flags around to sell respective feuds. Such as the Shield triple threat or the ongoing issues between AJ and Cena. We’re in Washington DC. Hosts are Michael Cole, Byron Saxton and JBL. The latter is off toSmackDown. Byron is staying on RAW. Not sure whose bright idea that was.

One thought on “Battleground 2016”