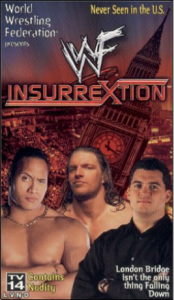 Arnold Furious: Normally when writing these books I deliberately do everything in order. It’s not because I have OCD or anything but I like to reference myself and earlier events. It helps me to mentally catalogue the history of wrestling. When I do stuff out of order, I frequently find myself referencing future events, which I don’t like doing. So when I deliberately skipped over Insurrextion 2000 when I was doing my 2000 quota for this book it wasn’t an easy decision to make. I feel that UK PPVs are hard to watch when lined up against the American equivalent from a month, or even a week, beforehand. The quality of wrestling never matches up and it’ll always feel like a lightweight version of a proper American PPV. So I skipped Insurrextion and decided to watch it as a standalone show, with no real frame of reference for how good things are compared to the shows around this one. I’m hoping it’ll be a more rewarding experience, seeing as 2000 had lots of great wrestling and great shows. Instead of feeling like a subpar 2000 show, it should just feel like a good show. If that makes sense.

The card for this show is one of the most loaded cards you’ll see on a UK-only PPV too. You’ve got Angle-Benoit, Guerrero-Jericho, Hardys-E&C and the main event is Rock vs. HHH (& Shane). We’re in London, England. Hosts are Jim Ross and Jerry Lawler.