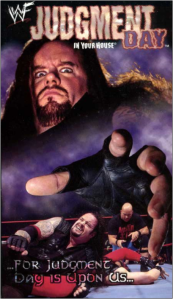 Arnold Furious: This is yet another chapter in the WWF Championship story of 1998. Having eventually gotten the title belt off Steve Austin, something Vince McMahon had been trying to do since just after WrestleMania, he found the WWF a company without a champion. Common sense prevailed and the WWF simply booked the two men who pinned Steve Austin the previous month against each other for the title. Easy. But Vince had yet another cunning plan; appointing Steve Austin the referee for this match in order to humiliate him further. If Austin refuses to count the pinfall and raise the hand of the winner he’ll be fiiiiiiired. We’re in Chicago, Illinois. Hosts are Jim Ross and Jerry Lawler.