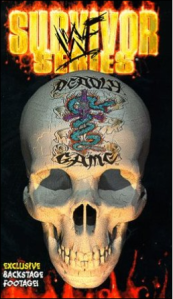 Lee Maughan: Vince Russo is a cancerous polyp on the anus of professional wrestling. A weedy, know-nothing New Yawk loudmouth greaseball with a sweet tooth for bad B-movies and campy entertainment (he’s noted as a major fan of the schlocky 1960s Batman television show as well as glam rock merchandising machine KISS), Russo also grew up a huge fan of professional wrestling yet somehow managing to lack all comprehension for the things that make the business great. Worming his way into the industry by writing a nuisance letter to Linda McMahon (who hired him principally to put an end to his largely anti-WWF radio show Vicious Vincent’s World of Wrestling and keep his hypocritical mouth shut), Russo managed to charm his way up the ranks of WWF Magazine (lord knows how he managed that given his TERRIBLE writing style that included seemingly RANDOM words written in BLOCK CAPITALS, along with MULTIPLE exclamation marks at the end of every other sentence!!!) and into a senior booking position with the WWF, presenting an attention-deficient style of crash TV that was high on excitement, but low on substance, a bit like eating pure sugar for every meal. Oh sure, candy for breakfast, lunch and dinner sounds awesome, but it’s only fun and games until the diabetes inevitably kicks in.
Amazingly enough, there are people out there who still stick up for Russo’s maniacal booking reign of terror, content to ignore the hell he unleashed upon WCW around the turn of the century and on TNA programming during the 2000s. “Oh, but he gave everyone a storyline!” they’ll claim. Yes, and look what that did for the career of Beaver Cleavage. The problem was, Russo would give someone a storyline, a gimmick or an angle, and then change course with it two weeks later when he felt the fans had the direction sussed out. He became obsessed with “swerves”, with trying to surprise fans and present the unpredictable that it was to the eternal detriment of the product as a whole. He had absolutely no understanding of why certain things had to be predictable, of why the tried and tested methods he so desperately sought to circumvent were the way they were. Clichés become clichés for a reason, but he could never be programmed to understand that, no matter how often Jim Cornette screamed them into his putrid, wax-filled lugholes. Even more disagreeable was the fact that Russo just simply refused to learn from his own failures. To be brash and hard-headed, to not to take anyone’s advice when you’re young, to ignore all the warnings about making yourself sick once you no longer need parental permission to slip your fingers into the biscuit tin, that would be one thing. But Russo fell on his arse time and time and time again only to still keep trying to jump over the grand canyon on a child’s tricycle, never once stopping to question why everyone else took the bridge. No, he was just perfectly content to show up at Raw and throw sixteen slices of piss-soaked bog roll at a wall marked “ideas” in the hope that something would stick. Invariably, one or two things would, but like a hyperactive child demanding a new pair of action figures on a trip to Toys R’ Us, he was already bored with them by the time he got home, instead going right back to throwing another sixteen slices of piss-soaked bog roll at the wall, negating the ones that were already neatly patterned into place. This show is Vince Russo’s zenith.
To recap:

In notes from Sunday Night Heat prior to the show:

– Too Much beat the Hardy Boys, (yes, there was actually a time when Brian Christopher was pegged as a bigger potential star than Jeff Hardy) in the dark match.
– LOD 2000 of Animal & Droz followed up their heel turn on the perpetually drunk Hawk a week prior by losing to JOB Squad geeks Bob Holly & Scorpio in just 2:17 after Al Snow belted Droz with Head. (That Vince Russo, eh? What a booker!)
– Val Venis beat Tiger Ali Singh in a drab little 2:36 affair, pinning him with a fisherman suplex after the Godfather (a babyface, by the way) came barrelling down the aisle and threw Singh into the ringpost on the outside, making it two-for-two in terms of shitty finishes for the night before we’ve even made it to the pay-per-view portion of the festivities yet. (That Vince Russo, eh? What a booker!)
– DOA of 8-Ball & Skull, accompanied by former Road Warriors mastermind “Mr. Dot Com” Paul Ellering (don’t ask, it was another Vince Russo thing), went to a no-contest with… well, nobody, getting jumped before their match was due to start and having an unprovoked beating put on them by Bradshaw & Faarooq, marking the Acolytes’ first on-screen appearance as a duo. Another screwjob then (that Vince Russo, eh? What a booker!), but on the plus side, it spared us actually having to suffer through another tiresome Harris Boys match.
– Gangrel pinned “Lethal Weapon” Steve Blackman with an impaler DDT at 3:21 after Edge missile dropkicked Blackman from behind. You might think with a four hour show to fill (including the hour of Heat) that it’d be a good idea to just book all clean finishes and a minimum of bullshit on the pre-show to avoid burning the crowd out early, but then I’m just a lifelong wrestling fan so what the hell would I know? (That Vince Russo, eh? What a booker!)

– Owen Hart then repels from the ceiling bedecked in full Blue Blazer garb (don’t ask, it was another Vince Russo thing), which was intended as a cute little parody of what Sting had been doing in WCW, but only makes for deeply uncomfortable viewing in hindsight when his equipment malfunctions, leaving him stranded. Six months later, the WWF would attempt to run that same gag, resulting in much more tragic consequences.

One thought on “Survivor Series ’98”