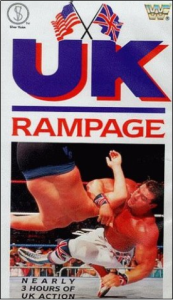 James Dixon: This was a UK only show from the London Docklands Arena and it was televised live in the country on Sky Movies +. Roddy Piper and Vince McMahon are your hosts. Even though it took place prior to all the UK releases before it, the catalogue system is all over the place and it is out of sequence.

The Warlord vs. Jim Neidhart
We start off embarrassingly, with Mel Phillips announcing Jim Neidhart as the Warlord comes down to the ring. He even notices him coming, stops halfway through the announcement, but then clearly just thinks: “screw it, we are only in the UK” and carries on! Bush league. This is also available on the World Tour ‘91 tape, and I have reviewed it there also. It’s the battle of two big bulky guys. Neidhart was capable of decent matches, but only against opponents that could carry him. Warlord has never had a good singles match in his life. They have a power battle to start, and Anvil controls with a headlock. Tackles move no-one a few times, until a flying one sends Warlord through the ropes and to the outside. “Warlord does scratch a lot” says Piper insightfully. That gives you an indication of the quality of the match. Outside the ring, and Warlord throws Neidhart into the steps and follows it up with a bearhug. Jesus, Warlord was so one-dimensional. Generally the rule is: if a wrestler applies a bearhug, he is the shits. This has been so slow and boring, it doesn’t even really matter what they do next, they can’t save this now. Anvil escapes and hits a clothesline for two. Ten punch in the corner and a double axe off the middle get another two. Anvil goes for a splash, but Warlord gets his knees up. A sneaky O’Conner roll wins it for Anvil out of no-where. Nearly 15-minutes is an absolutely crazy amount of time to give a match featuring two such limited guys. This was all rest-holds and not a great deal else.
Final Rating: DUD