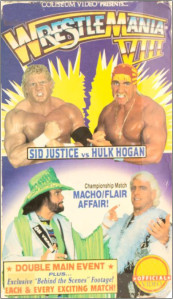 Arnold Furious: Politics. Sometimes it’s a dirty word. Sometimes politics can ruin shows, angles and potentially great matches. But sometimes politics can be a positive boon to shows. The original plan for WrestleMania VIII was Flair vs. Hogan for the belt. It seemed like a no-brainer too. You’ve got the two biggest stars in wrestling in your company. One is a face. One is a heel. Go for it. But politics intervened. Neither man could agree a finish with Vince McMahon and the match was left in limbo, so both received different matches. Flair against Savage and Hogan against Sid. Hogan was clearly miffed at not getting the chance to pin Flair, and he got to go on last. However this was Hogan’s big farewell as he was about to take the rest of 1992 off. There was even talk of Hogan retiring. This wasn’t down to a lack of desire nor storyline issues, but rather the steroid scandal. It was about to erupt and Hogan had been widely accused in the media of being on steroids. He publicly denied it but the heat was so intense that he took time off. Of course in reality Hogan had been taking steroids, as he admitted in his book, so not only was he a ‘roid monster but now he was a liar too. So much for the WWF’s superhero. The steroid scandal had one hugely positive effect on wrestling; it meant that the technical guys got pushed to the moon. They didn’t need steroids to put on good matches, and with the muscular guys on the way out it was time for Bret Hart, Shawn Michaels, Owen Hart and others like them to get an opportunity. Vince was still a big fan of huge wrestlers so he hired as many naturally large men as possible to fill the void of his muscular monsters. The Hoosier Dome is a big venue, and compared to WMVII it looks like business is up.

One thought on “WrestleMania VIII”