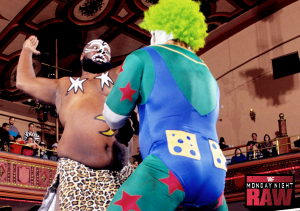 Arnold Furious: We’re in Manhattan, New York. Hosts are Vince McMahon, Randy Savage and Rob Bartlett. The latter blows the Raw tagline and then apologises for how much he sucks. We go straight to Video Control, where Hulk Hogan has been sent to do charity work. Urgh, faux pas. Hey, kids, you can achieve anything… if you shoot steroids, brother. I probably shouldn’t have mentioned how much I liked the WWF’s work with charity, as this video package goes on forever and just kills the mood. It does mention Vince McMahon is the CEO of the WWF though, which I don’t remember being acknowledged onscreen at any other time. Hogan is humble and his story heartfelt but the segment goes on forever. Hogan introduces Vince McMahon, who gets an award for his work with charity. After 10-minutes, quarter of the show, Vince gets done with his rehearsed speech and we can get on with the show. Like I said; I think it’s great that the WWF do all this work with charities but 10-minutes of talking about charities is not how you should ever open a wrestling show. Ever.

The Bushwhackers vs. Damien Demento & Repo Man
The Bushwhackers go all ECW and enter through the crowd, on the balcony no less. I hate The Sandman’s entrance when The Sandman does it, so you can imagine my distaste at Luke and Butch doing it. Especially as we’ve now gone 15-minutes into a 45-minute show and NOTHING has happened (this isn’t one of those generic “no wrestling on a wrestling show? Bullshit!” Kinda complaints. Nothing at all has happened). When the action gets underway. The Bushwhackers employ double ass-biting. The comedy double teaming continues. Not that anybody would object to two losers like Demento and Repo taking the offence. Demento is absolutely dreadful and Repo is a joke. By 1993. The Bushwhackers were at their level worst. They’d fallen into lazy bad habits and had a match worked out that they could wrestle with anyone. Demento throws not only the worst gimmicked punch I’ve ever seen, but proceeds to then throw two WORSE than that. He’s missing by feet, not inches. It’s embarrassing. It’s a good job The Bushwhackers are over for their goofy stuff, because otherwise this would be a genuine contender for the worst match in the history of the company. The finish has Demento getting pinned, but Repo runs in, miscues and the Battering Ram finishes him off. This match should be considered a crime. It’s one of the most business exposing pieces of shit I’ve had the misfortune to see. WCW put on a few matches on a par with this, but outside of XPW and scumbag Indies, I can’t think of anything worse I’ve seen. Possibly the worst match in the history of Raw. Repo Man was so distressed he left the WWF never to be seen again (apart from gimmicky nostalgia appearances).
Time: 5:28
Final Rating: -****

Tatanka vs. Reno Riggins
I actually like Riggins. He’s one of the WWF’s better in-house jobbers because he makes everything look good. Including his own offence. I honestly thought he had the personality and skill to get a push somewhere, but once you’re a jobber, you’re a jobber for life. Tatanka is actually the worse of the two and hooks a boring armbar after Riggins takes a few tasty bumps. Riggins then shows Demento how you punch a guy. Maybe Two Face showed him. They trade on chops and that’s good fun too. Both guys receive and dish out chops with aplomb. Tatanka scores with a powerslam and the Papoose-to-Go finishes. I was actually disappointed it ended so quickly.
Time: 3:30
Final Rating: **

Hall of Fame
This was new to 1993 and created to celebrate the career of Andre the Giant after his recent death. The package from Video Control is touching and gives us a look at Andre’s lighter side. Sure, he hadn’t been worthwhile in the ring for a very long time, but Andre was still a legend. It is nice to see them pay tribute to the big man in such a way.

Money Inc. vs. Jeff Armstrong & Scott Rich
I had to stop and look up Scott Rich’s name as Vince McMahon starts off calling him John. IRS cuts his usual “don’t cheat on your taxes” promo. Lazy. Ted takes offence at Scott Rich for sporting such a bad surname and stiffs the hell out of him All-Japan style. Rob Bartlett is so bored he starts channel surfing on the monitor, much to Vince’s chagrin. As far as Bartlett is concerned, we’re all chagrined out. Money Inc. use this match to showcase how good they are at tag teaming. Frequent tags, total domination and IRS finishes with the Write-Off. Ted DiBiase amused me with his hatred of jobbers, but apart from that it was a generic squash.
Time: 3:02
Final Rating: ¾*

Video Control takes us to Mean Gene and the WrestleMania Report. He runs down the card. We’re only a few weeks away. Gene seems stoked about the toga party at Caesar’s Palace and claims his toga is extremely skimpy. So, that’s why the buyrate tanked! Seriously though, when they’re using a toga party to sell WrestleMania, that shows you how unimportant the actual card is.

Doink the Clown vs. Kamala
Doink has a present for Kamala but refuses to give it to him, which gives him an opening to jab Kamala in the throat, chop block the knee and slap on a dragon sleeper. Doink might not be a fine sportsman but he was an evil bastard heel. Doink controls Kamala because of Ugandan stupidity. Kamala’s comeback offence is pretty sloppy by comparison. Doink again uses the present as a distraction. SHINY! Kamala gets counted out and the present is just an empty box. Kamala has an empty head. They run a bit of hide and seek under the ring along with running around the ring. Too goofy to be a main event. Doink should have done some damage. Kamala is getting his sympathy pop because he didn’t get a present instead of having his head caved in.
Time: 6:00
Final Rating: ½*

Interview Time: Vince has the Rob Bartlett Fan Club, which is the fat-assed Rosetti sisters. Rob makes out with one of them. Savage is loving it; “you can’t do any better, brother”. He just buried EVERYONE involved in this.

Most Entertaining: Reno Riggins. That about sums up this Raw.

Least Entertaining: Everyone in the opening match, Vince McMahon, Rob Bartlett and Kamala.

Quote of the Night: “Different and exciting at the same time” – Randy Savage describing either Doink-Kamala or his toga for WrestleMania. I’m not sure which. Either way he was aroused.

Match of the Night: Tatanka vs. Reno Riggins.

Summary: Oh lordy, what a catastrophe. I’m only too happy to hand over to James after that abysmal show. It really is saying something when my favourite match was Tatanka against a jobber. Not only that but it was the best segment on the show BY FAR. Just a terrible episode, with a mind-bogglingly awful opening match, which is one of the worst in WWF history.
Verdict: 13