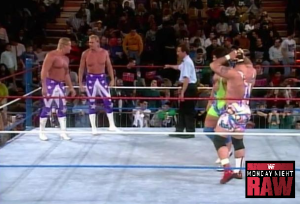 James Dixon: This comes from the night after WrestleMania, but has actually been in the can for two weeks, having been taped at the back end of March. Hosted by Vince McMahon and Randy Savage. Rob Bartlett is no-where to be found, and thus April starts on a high note! The commentary must have been recorded earlier in the day at the Wrestling Challenge taping because they talk about WrestleMania and a new WWF champion. That probably explains why Bartlett is not there, actually. The show certainly has the feeling of being live, so they have been rather clever here.

Bam Bam Bigelow vs. Virgil
Virgil is a step up from your usual TV jobber, but in reality he is not much further up the totem pole by 1993. Bigelow dominates proceedings, treating Virgil like the afterthought that he had become in the WWF. Vince talks about how Rob Bartlett lost all his money “the night before” at WrestleMania in Vegas and will hopefully be back the following week. I doubt I am alone in hoping that he is not. There is too much resting in this for a TV match, with Bam Bam using bearhugs and chinlocks, which is atypical of him. Usually his heat is exciting and energetic, but here he clearly can’t be bothered. Virgil’s few moves don’t come until the end, and they are sloppy, so Bigelow clocks him with a clothesline and hits the diving headbutt for the win. This was essentially a demolition job, but a rather slow one. This could have been halved and achieved the same thing.
Time: 6:59
Final Rating: *

Jerry Lawler comes out to make his Raw debut, and he would become associated with the show for the next 20-years, appearing on probably more episodes than anyone, the majority of the time from behind the announce desk. Lawler protests at the crowd chanting “burger king” and walks off.

Interview time: Yokozuna and Mr. Fuji are interviewed by Mean Gene, though neither say anything other than Yoko getting in “banzai” at the end. Gene says Fuji will file a formal complaint because the Hogan-Yoko match the night before was unsanctioned.

Bob Backlund vs. Kim Chee
Kim Chee!? And against Backlund no less! Literally nothing happens in the 4-minutes they do, and Chee has the gall to use a rest hold. There is nothing to say about this whatsoever. Backlund goes over with a bridged roll up.
Time: 3:58
Final Rating: ¼*

Damien Demento vs. Jim Brunzell
What the hell happened to Jim Brunzell? Once he was fairly over as one of the Killer Bees in the 80s, here he is a TV jobber in generic gear and an old square face. Demento is positioned as the star, which is rather remarkable really. This match is designed to showcase him, suggesting the company had some misplaced faith in his character. After that fiasco on the previous episode of Raw against The Bushwhackers, perhaps that is a surprise. Though, saying that, the match in question was actually from this same taping, so he is yet to suffer any possible ramifications. Vince ignores the match to deal with a weepy Bartlett on the phone, who says he has lost all of his money, as Vince pretends he can’t hear him. Randy Savage sounds genuinely giddy at not having to commentate with him, and gets in as many cheap shot shoot comments that he can. This is fairly competitive, with Brunzell getting some stuff in, but not much happens generally and Demento wins it. Another boring and uninspiring match on a show full of them.
Time: 5:07
Final Rating: ½*

Vince pimps the replay of WrestleMania, promoting it as if it was the greatest show ever. Was he asleep in the back while it was going on and only heard about what went down from pandering yes-men? It certainly sounds that way.

The Steiner Brothers vs. The Beverly Brothers
This is a rematch from Royal Rumble ’93. I love watching The Steiners, you can always rely on them to bust out some exciting stuff. The same cannot be said for The Beverly Brothers. The Steiners and Backlund are the only wrestlers on this show who competed at WrestleMania, and both were involved in nothing throwaway matches of little consequence, so it was safe to tape matches with them prior for a post-Mania “live” show. You couldn’t use any of the guys in the big matches because it would give the results away in advance to the Raw crowd, or they would be stuck in redundant bouts that didn’t mean anything. Saying that though, nothing tonight has meant anything anyway. This match has been ok, and is obviously the best thing on the show by a mile. The Steiners throw the Beverlys around with ease early on before a heat on Scott Steiner, with the focus being on his back. The Beverlys choose holds over throws, which is somewhat less entertaining to watch. Scott makes up for it by throwing in a high elevation tilt-a-whirl slam, which Vince calls “whatamanoeuvre”, as only he can. Things break down after the hot tag, and the Frankensteiner from Scott wins it. Fairly exciting in places, but the heat was typically dull from the Beverlys.
Time: 11:30
Final Rating: **

Jerry Lawler vs. Jim Powers
Finally, we get Lawler’s Raw debut. Jim Powers is in the same boat as Jim Brunzell; a guy who was over in the 80s as part of a tag team, but failed to get over on his own. He is almost unrecognisable from his 80s heyday, such is the change in his physique from roided monster to deflated man-child. I am enjoying the “secret” continuity between Jerry Lawler and Randy Savage, with the two exchanging a few barbs that reference their classic feud from decades prior, in a world before the WWF. It is not often stated, but Lawler was a dreadfully unexciting wrestler in the WWF, and I can’t recall a single match he had that could be considered “good”. He is awkward and moves around like he is made of rubber. This is not good either, and Lawler goes over with the piledriver, then jaw-jacks with Savage a bit more after the match.
Time: 6:16
Final Rating: ½*

Next week, The Bushwhackers are set to ruin my day against Money Inc. IRS and those two bumbling imbeciles in the same match? I can hardly bloody wait.

Most Entertaining: Scott Steiner. He just loves exotic suplexes and throws, and I love him for it.

Least Entertaining: Kim Chee. You get 4-minutes to put on a match, and figure the smart option is chinlocks. Yeah, just brilliant entertainment.

Quote of the Night: “He wants him to kiss his feet?” Vince asks aloud about Lawler. Watching it back with the benefit of hindsight, you can picture the “Kiss My Ass Club” formulating in an evil part of Vince’s long-term memory. That’s one for later.

Match of the Night: The Steiner Brothers vs. The Beverly Brothers. Everything else was shit.

Summary: This was an awful episode of Raw, and an entirely pointless one. The WWE has come a long way in the modern era in one regard, and that is the way they handle their post-Mania Raw as something un-missable and special. Over the years it has seen the return of Brock Lesnar, the debut of Goldberg, the return of babyface Hulk Hogan, and various other exciting and unpredictable things. In 1993 we (quite fittingly I guess) followed an atrocious WrestleMania with an empty shell of a Raw. There was no star power, nothing happening and just monotony throughout. The lack of any of the players who worked Mania due to the taped nature of the show, was a major negative and made this one of the worst efforts yet, following on from an equally bad show last week. I hope the WWF gets its ideas together for the rest of April, or it’s going to be a long month for us to suffer through!
Verdict: 18