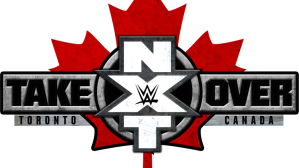 Bobby Roode vs. Tye Dillenger
Both these guys are Canadian and therefore over, because Canadians love their own. Bobby has his own choir. It’s suitably glorious. If his entire gimmick was just the entrance he’d be one of the best guys in the company. Unfortunately he’s mediocre in the ring. Tye is slightly better in the ring but massively over because of the Perfect Ten gimmick. Ten is as easy to chant as “yes”, he’s got a big future. This match has the kind of style that reminds me of wrestling from the past. It’s extremely heated and fast paced but there’s not much going on in terms of moves. However that’s irrelevant when Tye is stomping on Bobby’s hands to make him do Tye’s own Perfect Ten taunt. The whole ‘ten’ thing screws up the referee’s counting because the crowd scream “Ten” constantly instead of all numbers. In some way that’s more endearing that the Brit Wres ‘counting ahead of the ref’ deal. It serves to irk Roode, doing the ten-count punches, as the crowd scream “ten” with each one. The match goes a lot longer than expected, over fifteen minutes, and allows Tye to get all of his shtick in. Roode doesn’t really have shtick, to speak of. Other than stealing Tye’s shtick. Dillenger could get over on the main roster now. It’d take one show to get his gimmick over. The finish comes with Tye getting run into the post and the Impaler finishes. Solid work from both guys, made better in front of a heated crowd. I’m not sure why Tye can’t get wins but can take comfort in being relatively job-proof.
Final Rating: ***

One thought on “NXT TakeOver: Toronto”