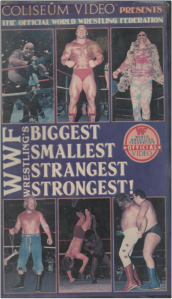 Andre the Giant vs. Samoan #3
The Samoan here is Samula/Samu, and this is just a clip of Andre thrusting his arse into Samu’s gut and Samu taking a flying back bump off it. For some reason, they show it in slow motion, making it look even hokier than it would anyway.

The Biggest
Clip-o-Rama: Bobo Brazil beats up Freddie Blassie, Haystacks Calhoun squashes some guy in the corner, and Ernie Ladd bearhugs two guys at once in a handicap match. Next, Ivan Koloff, who’s size comes not from height, but from upper body width and upper leg development. Meanwhile, Gorilla Monsoon polishes off The Wolfman with a ‘Manchurian Landslide’ (splash) but Wolfman basically no-sells it, immediately popping right back up after the three count to complain the loss. And to Piper’s Pit, where ‘Rowdy’ Roddy gets into an argument with Blackjack Mulligan.

Hulk Hogan vs. Big John Studd
Just some clips teasing a few bodyslams, as Ventura absurdly claims Hogan looks bigger than Studd because he has better definition. I’m not arguing the point about Hogan being better defined but come on now.

Clip-o-Rama: Nikolai Volkoff wins a squash match for himself & The Iron Sheik by using a backbreaker, then Tony Garea bounces off King Kong Bundy a few times.

Hillbilly Jim vs. Rene Goulet
The newest addition to the World Wrestling Federation, it’s Hillbilly Jim! Not only that but Ventura lets us know that Jim and all his hillbilly pals are to be profiled in the upcoming Wrestling’s Country Boys video cassette. Shit a brick. Finally, Jim introduces Uncle Elmer on Piper’s Pit.

The Smallest
Oh, you know what this means. First it’s clips from a tag team match with Ivan the Terrible & Billy the Kid against Tiny Tom & Butch Cassidy, then quickly on to more hilarity as Tiger Jackson & The Haiti Kid meet Pancho Boy & Dana Carpenter in a TV match. Of note here; the worst flying headscissors/hurracanrana attempt I’ve ever seen in my life, courtesy of Jackson. Not to worry though, he’d go on to a much greater degree of dignity later in his career as Doink the Clown’s little buddy Dink. To Madison Square Garden next, for yet another tag team match as Little Beaver & Sonny Boy beat Sky Low Low & Butch Cassidy when Beaver splashes Sky Low Low, which is a bit rich given that Beaver had already punched the referee in the face. I guess you can get away with that if you’re vertically challenged because there’s no DQ called, which has to be some of the most lenient officiating I think I’ve ever seen.

Sky Low Low & Little Brutus vs. Little Joey & Frenchie Lamont
This is announced as being 2/3 falls with a 45 minute time limit but I’m not sure I can even take another 45 seconds, and it’s a really old match as you can tell from the grainy film footage with dubbed on crowd noise. We join the action in process with the referee completely killing the heat by seemingly having no concept or understanding of any of the pinfall reversals and refusing to count, and then the whole thing turns into a Roadrunner cartoon before Brutus pins Lamont to win the apparent deciding fall.

The Strangest
Clip-o-Rama: The Rugged Russians, who pissed off all the other wrestlers in the dressing room because they stunk of garlic. The Wolfman, who never spoke and always wore a loincloth. And Pampero Firpo, the wild bull of the Argentine Pampas. The late Grand Wizard cuts a promo with Crazy Luke Graham, who promises sweet revenge on Bob Backlund for his ‘brother’, Billy. Wizard was a hell of a talker, of course. Clip-o-rama: Mad Dog Vachon gets a big babyface reaction from a crowd in Minneapolis for a match against Buddy Colt.

Afternoon Tea
Lord Alfred Hayes hosts an afternoon tea party for the refined, dignified Superstars of the WWF, in this case Mr. Fuji and The British Bulldogs. Unfortunately, Fuji brings his protégé Moondog Spot with him, who makes a slob of himself. I’ll be dog gone.

Mil Mascaras & Special Delivery Jones vs. Adrian Adonis & Dick Murdoch
Just a couple of clips of Mascaras in action as Ventura talks about Mil’s masks, although I might contend he’d have been better suited on the “biggest” portion of the cassette, in light of his legendarily massive ego.

The Stranger Side of Fashion
This is literally about a four-and-a-half minute musical montage of wrestlers in ‘strange’ outfits, like The Iron Sheik’s headdress and Roddy Piper’s kilt. Because, you know, silly foreigners look DED FUNNEY. LAFF!

The Barbershop
After cutting Andre the Giant’s hair in a memorable angle (not shown here), Bobby Heenan, Ken Patera and Big John Studd hit the TNT studio to give a demonstration in hairdressing. Best line goes to Heenan dumping goo all over the volunteer and saying “I don’t know what this is, but it can’t hurt!” after covering the poor guy in ‘de-louser.’

Newcomers
Clip-o-Rama: Mad Maxine! For those unaware, Maxine was a 6’2 lady wrestler from Germany with a green mohawk and a gimmick styled after the Mad Max films. Vince McMahon apparently had big plans for her since she began appearing on WWF merchandise and in early commercials for the Hulk Hogan’s Rock N’ Wrestling Saturday morning cartoon series, but an envious Fabulous Moolah wanted the role for herself and (as the booker of the lady wrestlers at the time) refused to give Maxine more dates. As a result, Maxine only appeared twice for the WWF before leaving to form her own travelling group with, amongst others, Luna Vachon. Next, Bobby Heenan takes Vince to a cave that would have looked unconvincing in schlocky 1950s B-movie to meet his latest find: The Missing Link. Finally, George ‘The Animal’ Steele dominates Steve Lombardi whilst eating a pair of turnbuckles in a match from the Philadelphia Spectrum.

The Strongest
Bruno Sammartino and Bepo the Mongol beat each other up. Naturally, no mention is made of Bepo’s later (then-current) incarnation as Nikolai Volkoff.

Arm Wrestling Match
Ivan Putski vs. Jesse Ventura
And if you can’t guess what happens here, clearly you haven’t seen much pro wrestling. For the benefit of those unaware, they start with a posedown then Jesse stalls for what feels like an eternity before finally locking up. Unique twist – Putski begins stalling on the lock-up once Ventura is ready to go and the crowd just explodes at that. Nice touch. So Jesse ‘gets the heat’ but Putski reverses it and Jesse uses the table for leverage. Finally, with Putski on the verge of winning, Ventura drags him across the table then brutally smashes him in the back of the head with his chair four times before spitting on him. Hey, if you’ve seen this angle once, you’ve seen it a million times, but if you haven’t, this version is pretty much perfection.

Persian Clubs
The Iron Sheik lifts some 75 pound Pe8rsian clubs above his head and swings them around without losing his balance. That’s pretty impressive actually. Sheik was one strong dude.

Bench Press Record
Big John Studd attempts to break the world bench press record but blames his failure on Vince’s poor spotting. Studd demands another attempt, this time with legendary weightlifter Bruno Sammartino spotting for him, and Studd presses the “700 pounds.” About half as long and thus twice as interesting as Dino Bravo’s interminable bench press angle from the Royal Rumble ‘88.

Feats of Strength
After a quick clip of a pre-match posedown between Ken Patera and ‘Mr. USA’ Tony Atlas, we get a collection of Patera’s feats of strength. He first rams a spike through a plank of walnut wood, then bends a solid piece of metal in half before blowing up and bursting a hot water bottle. Finally, Vince tries to run him over in a camper van but he blocks it using just his leg strength.

Summary: If you love clip jobs, this could be the tape for you, replete with out-of-context angles and more of Vince McMahon’s insane TNT skits. Besides the textbook example on how to do an arm wrestling angle, the best stuff is probably The Grand Wizard’s promo or Patera’s strongman act, but neither is really essential viewing. Pretty much a total pass for an awful, awful tape.
Verdict: 16