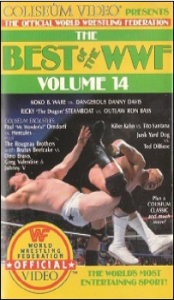 Arnold Furious: For me and a group of friends, June 28th is “Albert Day”. This tradition has been around since 2001, when the hairy backed one captured the IC title. It has morphed from a few drinks into an all-out 24 hour bender, with matching t-shirts and sloppy drunkenness. I’m writing this review on June 29th having suffered all day with a horrendous hangover. I had been sitting around watching movies, but finally drew the line at Christian Slater skateboarding flick Gleaming the Cube. Time to go to work. Your host is Gorilla Monsoon. He promises a classic between Bobby Heenan and Sal Bellomo. Really? Ok.

The Rougeau Brothers & Brutus Beefcake vs. The New Dream Team & Luscious Johnny V
This is from June 1987, with Beefcake going up against his former companions following his WrestleMania III face turn. Jacques must know about Hammer’s screwy selling because he cuts him off in mid-bump and chops him. They work heat on Beefcake, which doesn’t make much sense to me. Surely he should be the recipient of the hot tag. The good thing about sticking this match on the tape is that it’s from Indiana, and the crowd is molten hot for a match that most big markets (New York, Chicago, LA etc) probably wouldn’t give the same reactions to. Back in the 80s, the WWF got these reactions wherever they went. Vince McMahon’s travelling circus. Hammer takes most of the match for his team, much like all his matches in Dream Team, which means the match is pretty good. All action. Valiant is old and sloppy while Bravo is just sloppy. But in tag team matches one man can cover for a lot. Bravo can strike but can’t wrestle, so his bits are hit and miss. The crowd enjoy a treble meeting of the minds, and Johnny V goes out to the sleeper. Fun opener. Lots of energy and a smoking hot crowd.
Final Rating: ***

Ricky Steamboat vs. Ron Bass
This is from October 1987 and Steamboat has taken his family time off. I love Bass, but he can’t keep up with Steamboat. Bass is a no-nonsense kinda guy and it’s a pity they don’t go all-in on strikes, as that’s their best route. Whenever they do hit each other, it’s excellent. Steamboat gets some tidy bumps off Bass’ clotheslines and such. Much like the last match, they bust their asses out there and effort can overcome most deficiencies. Bass is marginally too inflexible to take it to the next level, like when Steamboat ranas him to the floor. It slows right up and loses all the impact. They scuffle around on the floor and Bass gets counted out because he’s too slow. Bass looked like he was moving in slow-motion compared to Steamboat, but he brought plenty of effort to compensate.
Final Rating: **¼

Danny Davis vs. Koko B. Ware
May ’87. Davis is banned from refereeing and into his heel act. Koko is too fast for the former official and dominates the early going. It’s about the most dominant I’ve ever seen Koko. Alfred Hayes wrecks Bobby Heenan’s commentary, treading all over his jokes and ruining the timing. Davis opts for an enormous amount of stalling, which you’d think Video Control would cut out. To show the difference in eras; the commentators can’t repeat the fans chant of “Davis sucks”. When the word “sucks” counts as profanity, you’re never going to get a sense of realism. People fighting each other use bad language. Davis actually stalls enough for me to see what’s happening in Gleaming the Cube, but then I laugh at how ridiculous Christian Slater’s hair looks and come straight back. There appeared to be several sinister looking Vietnamese people nearby. Back in the match, Koko attempts a Princess Bride sleeper, which fails because Davis is small. You don’t need to do that sleeper on small guys. Another move irks me where Koko hits a powerslam near the ropes and goes to hook the leg, but changes his mind because Davis is about to use that leg to get the ropes. Business suitably exposed Davis punches Koko with a foreign object for the win. It started out ok, but Davis’ insistence at stalling and ‘that’ finish, one the WWF did a LOT at the time, killed it.
Final Rating: *

Wrestling 2 Gleaming the Cube 0. Null points all round.

Ted DiBiase vs. The Junkyard Dog
Another match from October 1987. Ted opts for some Danny Davis level stalling. Mainly because actually wrestling JYD would make for a boring match. Of course Ted walking around ringside for 30 seconds at a time isn’t too thrilling either. Ted rations out his bumps one at a time. Ted spends so long outside that I head back over to Gleaming the Cube. The Vietnamese guy has an evil moustache. His daughter, I think, is the same girl that’s in Big Trouble in Little China and I’ve never seen her in anything else. A quick snoop on IMDB reveals she wasn’t in anything else. A two movie gal. Anyway, Virgil offers some cash to JYD, which gets him punched out and the money re-circulates itself into the first two rows. They counter going back inside, with JYD switching his weight on a suplex only for Ted to roll through it into the pin. A nothing match but the ending was excellent. Seeing as I spent a good sized chunk of the match thinking about Big Trouble in Little China though…
Final Rating: ½*

Spiros Arion & The Yukon Lumberjacks vs. Andre the Giant, Dino Bravo & Tony Garea
The video era just about captures the tail end of Spiros’ career. The Greek was a big star in the 60s and 70s but retired not long after this outing at MSG in 1978. The Yukon Lumberjacks are the reigning tag team champions. Their run at the top was relatively short, as Yukon Pierre retired after an incredibly short three year career. Yukon Eric went on to success elsewhere, mostly in tags, before dying aged 35 from a brain tumour. Garea was a tag specialist and won the tag titles with Haystacks Calhoun and Dean Ho. In a few months he’ll end the Yukon reign too, with Larry Zbyszko. This is the Coliseum Classic and is 2/3 falls. They screw up the psychology in the early going as Garea makes short work of all the heels. If it was Andre, that’d make sense, but Garea? You might as well paint JOBBER on the Yukon’s tights. It doesn’t help that Yukon Eric is all kinds of green. Back bumping a punch to the back of the head? Ludicrous stuff. They try for a triple team but Andre runs in to stop that and it’s a DQ for the triple teaming. Lame! Watching Bravo in the 70s is fun. He has a mobility that he lost later in his career due to muscle mass. He’s still extremely muscular, but it doesn’t hinder him at this juncture. Andre gets a tag and destroys Yukon Pierre before splashing him. 2-0. Squash! Andre and Bravo looked great here, which is a marked contrast to the 80s where both of them became horribly immobile for differing reasons.
Final Rating: **

Paul Orndorff vs. Hercules
Back to 1987 then, with babyface Orndorff against Heenan’s charge; Herc. Lanny Poffo is on commentary. I think they must have had a wager about how many Irish whip reversals they could get in one match because there are LOADS. At one point they both get two reversals EACH. I find it both distracting and hilarious, so I’m not sure how to rate the match. The rest of the contest is eaten up by Herc hitting sloppy clotheslines, which Orndorff sells extremely well considering their quality, and bearhugs. Poffo gains bonus points for the match by describing the “skulduggery” on show. I think that’s the only time I’ve ever heard the word used in wrestling commentary. Orndorff rather whiffs on a dropkick and Herc is in comedy selling mode too. Heenan eats a right hand, Orndorff with the piledriver on Herc and Rude times his run-in perfectly for the DQ. The match was silly in the extreme, with lots of mistakes but I gained a perverse pleasure from how entertaining it was. Rude continues the assault only for Orndorff to run him off with Oliver Humperdink’s cane, dragging Dave Hebner around in the ring, hanging onto his leg in the process.
Final Rating: *¾

Bobby Heenan vs. Salvatore Bellomo
This is from November 1984 and it shows how little Heenan rates Bellomo; he’s got no back up at all. Heenan gets a few jollies from selling and bumping around for him. Even when Sal doesn’t exactly connect cleanly with his moves. Heenan just flops around like a managerial dolphin caught in a massive net designed to capture tuna and jobbers. Heenan naturally takes short cuts and Sal can’t cope with eye rakes and such. The crowd, in MSG, seems strangely subdued as Heenan is only any fun when he’s getting beaten up. Sal tries for a sunset flip but Heenan punches him in the face and gets the pin. Eight minutes is a bit much for a Heenan match. He is fun taking a beating but his offence was rough and Bellomo isn’t the best.
Final Rating: *

Tito Santana vs. Killer Khan
Dear lord, who booked this? June 1987 in Houston, this rounds out the tape. Much like an awesome car chase rounds out Gleaming the Cube. This was during Khan’s brief return to the WWF. He had a shot at Hogan during it. Vince had more money and space for wrestlers on his roster than common sense during the peak of the wrestling boom, so all manner of crap made it into his rings. Khan is a weird case study as wrestlers often get billed as being from different places. Samoans from Japan, Hawaiians from Japan and yet an actual Japanese wrestler, albeit a shitty one, gets billed from Mongolia. Khan got into a hot angle with Andre because he’s incompetent and legitimately broke Andre’s ankle by mistake. Khan spends a lot of the match just sucking the life out of it, regardless of what Tito tries to get going. So I’m watching that car chase instead. Tony Hawk driving a Pizza Hut truck is better than a Tito Santana armbar. At least in this match. Even if this match is a bust, wrestling is still better than an 80s skateboarding movie by a surprisingly close score of 4-3. This match only gets good when Khan pisses Tito off and he gets that famous Latin American temperament out of whack. Khan can’t bump anything Tito has though so the comeback sucks. Khan dumps Tito crotch first on the rope for a lazy DQ. Horrible match to finish the tape. Santana did what he could but Khan gave him nothing to work with.
Final Rating: ¼*

Summary: I’m pleased this tape worked out to be slightly better than Gleaming the Cube. If it hadn’t of done then 80s wrestling would have been in real trouble. The opener is really hot, surprisingly so, and there are a few other highlights during the tape. I like to think Paul Orndorff and Hercules are still countering Irish whips somewhere.
Verdict: 34