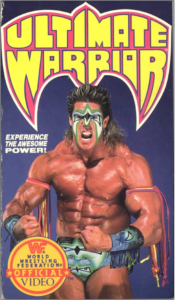 James Dixon: This is also known as The Return of the Ultimate Warrior in the UK. We start with footage of Warrior’s return at WrestleMania VIII. I am going to try and be only positive throughout…

WWF Championship
WWF Intercontinental Championship
Hulk Hogan (c) vs. The Ultimate Warrior (c)
This is a rather famous match from WrestleMania VI, though Alfred Hayes doesn’t seem to know that, asking if it is from “about a year ago”. Oh right, positive… Well, in that case I am thrilled that the superb commentary from the night has been replaced by a retrospective from Gorilla Monsoon and Lord Alfred Hayes. I really enjoy being taken out of the moment, and Hayes sure does offer an, erm, unique alternative perspective. Despite the contempt I have shown for both guys involved over the course of these books, I actually really like this match. I think it is a genuine classic for the ages. Ok, there is little in the way of scientific wrestling, but I don’t prescribe to an elitist viewpoint that only technical masterpieces can be classic matches. Wrestling is all about storytelling and drama, and this delivers in spades. Everything is logical, flows and makes sense for the guys in there. I love how they match each other move-for-move. The atmosphere is great too, with this being an incredibly rare face-face scenario at the time. There are actually a lot of parallels with the Andre match at WrestleMania III, in that many wrestling fans probably know it inside out. It has the same big time feel to it as well, and a crowd that genuinely doesn’t know who is going to win. It might make me seem like a hypocrite because I enjoyed this so much yet always rip on both guys, but look, this match was laid out spot-for-spot in advance and rehearsed to make sure it came off as they wanted it to. At that, both guys were fine. Better than fine even. However, this was a rarity and most nights they went out there and just worked, and that changed everything. Hogan reverted to his usual match and routine that he did with everyone, and Warrior just ran around doing clotheslines, hoping someone superior such as DiBiase or Rude would carry him through. Watching it back, it is hard to accurately assess how well this holds up today. In one sense it is timeless and will be long remembered after the WWE cut and paste guys have gone, but athletically it is not a patch on modern standards. This is a very slow match in places, but if you appreciate storytelling over spots, then you will enjoy it. Anyone who rates it lower than this, doesn’t really get what wrestling is supposed to be about. As far as a match between Hogan and Warrior goes, I would say it is about perfect.
Final Rating: ****

The Ultimate Warrior vs. Papa Shango
We go back to the “present” in May 1992, from Lexington, Kentucky. Shango and Warrior had a fairly notable TV feud in ’92, with Shango “cursing” Warrior a number of times, making black liquid drip down his face and on another occasion making him throw up. It’s going to be hard to be positive about this. I will tell you something that I am not proud of: I actually enjoyed this feud when I was growing up, and genuinely perceived Shango as a legitimate threat to Warrior because of his wacky voodoo shenanigans. I thought Shango’s gimmick was pretty good, and if the Undertaker character worked, then Shango could have too, they were pretty similar in many ways at the time. Charles Wright played the character with some conviction, but his ring style just didn’t translate. He was very dull. You might notice I haven’t mentioned the match, but that is because I am trying to stay positive. I thought the best way to do that was by not talking about this dog of a match at all. What is there to say? It’s a basic 5-minute formulaic TV match, with Warrior winning with the shoulder block and splash combo. If you want positive, then I will say this: if you love clotheslines, nerve holds and slams, watch this match.
Final Rating: ½*

The Ultimate Warrior vs. Skinner
We go to Kalamazoo, Michigan for the next match, from April 1992, just a few days after Warrior’s return at WrestleMania. Vince McMahon and Mr. Perfect are on commentary and the workrate levels on this tape have gone up just from having Perfect involved. This will be brief; Skinner was portrayed as a total jobber. Skinner spits in Warrior’s face to begin with, resulting in a couple of slams and Warrior throwing him to the outside.  Clothesline on the outside from Warrior and another one inside. The flying tackle and splash finishes this in under 2-minutes. If you REALLY love clotheslines, and seeing absurd WWF gimmicks get annihilated, then check out this match.
Final Rating: ¼*

The Ultimate Warrior vs. Brian Knobbs
A few weeks later, still in April 1992, this from Syracuse, New York. This takes place in TV world the week after Papa Shango first cursed Warrior. They are really pulling out the classics here! “This place is bonkers” says Dizzee Rascal, sorry, Vince McMahon on commentary. Warrior and the Nasty Boys were actually involved in one of my all-time favourite WWF angles. It was in the build up to SummerSlam ‘92 and Warrior and Savage were forced to team up against the Nasty Boys. Both faces got the living hell kicked out of them by the Nasties, Ric Flair and Mr. Perfect. It was a superb piece of business. Warrior has had much the better of this, despite the attempted involvement of Sags and Jimmy Hart. Midway through, Papa Shango skulks down the aisle and steals part of Warrior’s outfit. A few clotheslines and the tackle/splash combo later, and Warrior wins in under four minutes. Jesus, we are flying here. It is easy to be positive about that, I am ALWAYS happy when an Ultimate Warrior match is short! I am also pleased that Coliseum Video decided to cut out the post-match angle of Shango making Warrior razz, having teased that they might by showing Shango returning to the ring. Thankfully, the incredibly competent employees of Coliseum spotted the impending doom, and we cut abruptly to the next match.
Final Rating: ½*

The Ultimate Warrior & The Undertaker vs. Papa Shango & The Berzerker
The final match of the tape comes from Cornwall, Ontario in June 1992, and what a curious match it is. Taker was working a rather uninspired program with Berzerker at the time, and obviously Shango and Warrior had feuded, though it has to be said, neither rivalries are exactly classics. Taker and Warrior is certainly a strange teaming as they had a series of matches themselves in 1991, usually body bag matches that headlined B-shows, prior to Warrior leaving the company at SummerSlam ‘91. Taker pairs off with Berzerker once things get going, and the latter hits an impressive dropkick to send Taker outside. Taker lands on his feet, and throws Berzerker into the steps. Warrior comes in and hits a big slam, and a pair of clotheslines in the corner. An observation: Warrior was nowhere near as over in 1992 as he was before he left. The crowd used to go absolutely crazy for Warrior when he was at his peak, but the response to him and the match generally has been lukewarm at best. Though this did come at the end of a monster taping, where the WWF filmed an incredible two month’s worth of matches for Prime Time Wrestling. Berzerker, Taker and Shango had already worked prior to this too. The crowd were probably burnt out from some of the dire and endless squash matches they had seen. Warrior was a strange choice to take the heat here, because Taker is not exactly capable of making a quick hot tag in ’92. Taker also sells better, so it’s a bit baffling all around. Either way, Warrior wins by pinning Berzerker with the usual, and that is the end of the tape.
Final Rating: ¼*

Summary: This tape is essentially the story of the Papa Shango vs. Ultimate Warrior feud, with a cracking match tacked on to unbalance and skew the tape’s overall rating. Make no mistake; this is a bad, bad tape after Warrior-Hogan. Even that is ruined by changing the commentary. Don’t bother with this, unless you love Warrior or you love clotheslines.
Verdict: 36