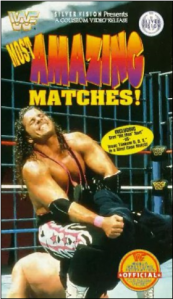 James Dixon: Presented by Dok Hendrix, who spends a few minutes discussing Jerry Lawler’s feet. This is the UK version of the tape, and the running order is slightly different, but the content is essentially the same.

Kiss My Foot Match
Jerry Lawler vs. Bret Hart
This feud had been rumbling along on and off for two years, with Lawler first attacking Bret during his KOTR coronation back in 1993. The crowd is more responsive than you might expect considering they have just sat through one of the most awful PPV events of all time, though it does get even worse yet. Bret on his day was one of the greats, if not the greatest, but he never seemed to be “on” when he worked with Lawler. Their matches invariably sucked, and their styles just didn’t gel. It’s not that there was anything wrong from a technical standpoint, it is just Jerry Lawler in the WWF was tiresome, and Hart was usually in a career lull of sorts when working with him. The result is matches like this, where nothing really happens. Hakushi turns up to try and bring some excitement, but his interference backfires and Hart wins with the Sharpshooter. He shoves his toe into Lawler’s mouth and then forces Lawler’s own “stinking foot” in for good measure. Not pretty. Match was 10-minutes but felt like 20. 1995 was probably Bret’s worst year on PPV in the WWF.
Final Rating: *

Casket Match
King Mabel vs. The Undertaker
This comes about because Mabel sat on Taker’s face with his fat ass legdrop, and bust his eye. It did have one positive effect though; it caused Taker to introduce his wonderfully frightening “Phantom of the Opera” look, as he began sporting a white mask to protect his face. Mabel has stolen the melted down urn as well to add an extra bit of spice to proceedings. Mabel has some ridiculous hair here, with a Mohawk that resembles a gladiator’s helmet. You could brush your boots with it. The match is awful of course, but at least they keep it fairly short with minimal resting. Mabel has it won when Mo dumps Taker in the casket, but they stand around celebrating and dancing instead of closing the lid. Imbeciles. Taker gets out and polishes Mabel off soon after with a chokeslam. Well, something vaguely resembling a chokeslam anyway. Taker gives (a better one) to Mo for good measure and dumps both of Men on a Mission into the casket. That wasn’t quite the end of them in the WWF, but after the Royal Rumble they were gone. Mabel would return of course, going onto have various runs in the WWF as Viscera and Big Daddy V. As Viscera he was involved with the Undertaker again, getting kidnapped and brainwashed by the Ministry of Darkness. Anyway, the match was bad, but not as dreadful as I remember it being.
Final Rating: ¾*

Crybaby Match
1-2-3 Kid vs. Razor Ramon
They just love the gimmick matches on this tape don’t they? The stipulation here was that the loser would be dressed like a baby. There was method behind the madness, as Kid had developed a reputation as a cry-baby from all his whining, and these two were involved one way or another right from Kid’s debut in 1993, where he famously beat Razor in a massive upset on Raw. He also cost him the IC title the previous month at the Royal Rumble. We are joined in progress, with Kid in control with a long sleeper. Why they cut this, a decent match, but showed the previous two in full is baffling, but entirely typical. The full match is what you would expect from two Kliq guys, and they of course work well together. Razor teaches Kid a lesson in respect with two Razor’s Edges for the win, then puts him in a diaper as per the stipulation. It sounds as bizarre as it is, believe you me. Kid’s manager Ted DiBiase takes baby powder to the face for good measure too. Kid’s reaction when he comes around and realises he is wearing a diaper is gold. Interestingly, all three of the guys involved here would be in WCW within a few months, and I can’t entirely rule out a direct correlation between this match and that… The match is worth seeing for the sheer absurdity of it, though it’s a shame it is clipped here, and it does hurt it a little.
Final Rating: **½

Arkansas Hogpen Match
Hunter Hearst Helmsley vs. Henry Godwinn
Anyone who might question Triple H paying his dues needs to watch this match. It is yet another gimmick encounter, with the idea being to throw your opponent into a hogpen, filled with live pigs and faeces. Yes, actual honest-to-goodness, real-life pig shit. We are joined in progress once again, presumably because after the first two matches, someone in Video Control realised that there was a 56-minute limit on the tape, so decided to shave time. I am not particularly bothered, because I cannot stand wrestling hillbillies at the best of times. The future Triple H suffered a large gaping gash to his back in this match, and then still had to take a nasty bump on it into the pig shit. Kevin Nash tells a story in a shoot interview about how when he wrestled him in 2011, he noticed he still had the scars from that match, some sixteen years later. I guess it was worth it in the end, now he essentially runs the wrestling world. From the shit heap to the stars indeed. One of the highlights of the match comes from the commentary desk, when Jerry Lawler claims Vince McMahon is from Bitters, Arkansas and Vince immediately gets aggressive and defensive, shouting “I’m not from Bitters, Arkansas, what are you talking about!?”. Vince HATES the south, even though he is from there, hailing from North Carolina. Helmsley wins with a backdrop into the pen, but Godwinn is a sore loser and presses HHH onto his face in the shit, then slams him. Decent enough actually, and once again a little better than I remember it being, but hurt by clipping again.
Final Rating: **

Steel Cage Match
Bret Hart vs. Isaac Yankem DDS
The final match is another gimmick bout, though a somewhat more conventional one. We start in progress again, and it is well underway, with Bret sitting with the Sharpshooter locked on the future Kane. Jerry Lawler gets involved and prevents Bret from escaping, so Gorilla Monsoon comes out and puts him in a shark cage. How handy that they just happened to have one around! Actually, Monsoon had promised in advance that if Lawler interfered he would be put in there, which is a shame for Lawler, who is scared of heights. The antics with Lawler detract entirely from the match, but nothing is really happening anyway. The feud between Bret and Lawler continued to rumble on after their “classic” KOTR confrontation, as this match occurred in September 1995, some three months later. Yankem’s whole reason for coming into being was down to Lawler also, as he was brought in by the King as his dentist. Don’t ask; it was 1995. Lawler gets a nosebleed and complains loudly, as nothing continues to occur in the ring. This is the Jerry Lawler panto show, with the side attraction of a steel cage match. Lawler throws Yankem a key to the cage door, which is strange because in most if not all cage matches prior to this, you could happily escape via the door without needing a key, because the ref would just open it for you. I don’t know if it was a special stip for this match, but it is weird either way. Bret uses an O’Connor roll to prevent Yankem escaping, momentarily forgetting that you can’t use pinfalls, so he covers by punching Yankem in the cock. Bret escapes and wins the match, as Lawler shakes with rage high above. A lot of silliness but harmless enough, though the highlights were the Lawler shenanigans rather than the wrestling.
Final Rating: *½

Summary: This release probably should have been called Most Unusual Matches or something of that ilk, such was the gimmick-heavy selection on display. The tape started slowly then settled into distinctly average and never surpassed that. The WWF’s “most amazing matches” they certainly were not. Everything on here comes from PPVs except the Hart-Yankem match, and that is not worth seeing unless you particularly like seeing Jerry Lawler cowering in fear. I am struggling to think of any other tape with two Bret Hart matches where the total rating doesn’t break ***. I guess that in itself makes it a collector’s item? Avoid this completely pointless release.
Verdict: 19