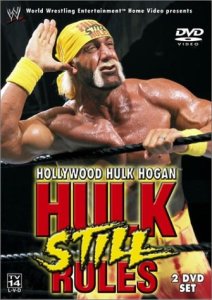 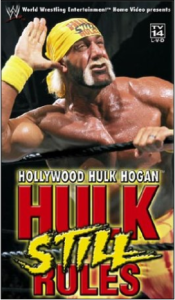 Lee Maughan: This is one of the WWF’s first real attempts at producing a comprehensive multi-disc DVD set on a given superstar, far beyond their earlier efforts made up of mostly kayfabed documentaries running less than 60 minutes with scant few extras. It should be noted that the notoriously cheap WWE have actually shelled out the not inconsiderable fee to have Jimi Hendrix’s Voodoo Chile (Slight Return) play out over the menu screen.

The Documentary
Hogan starts out on the road to stardom as a wannabe rock ‘n’ roller in a band called Ruckus, but ended up meeting Jack and Jerry Brisco at a bar, who sent him to train under Hiro Matsuda, who in turn broke Hogan’s ankle to see how tough he was. After he came back, Matsuda sent him around various territories, highlighted here by a series of rare clips from his run with Jerry Lawler in Memphis. After a couple of years of making no money, Hogan quit to go work on the docks until Jerry Brisco told him he was crazy and the money was in New York with Vince McMahon, Sr. He debuted there as a heel in 1979 before getting his first big run with Andre the Giant, but Hollywood came calling when Sylvester Stallone offered him the part of Thunderlips in Rocky III. McMahon told him he was a wrestler not an actor, and that if he didn’t show up for a booking with Jim Crockett he’d never work for the WWWF again. Hogan stood his ground, took the part, and went to work for Verne Gagne instead.

The whole AWA run is glossed over as “Hogan was popular, although not as popular as he would be in the WWF, obviously, duh, but couldn’t win the title”, and there’s no mention of his time in Japan working for (and with) Antonio Inoki, but instead he gets a call in 1983 from Vince McMahon, Jr. and heads back to New York, complete with a ringing endorsement on-screen from Bob Backlund. He admits he only wanted one good year out of it, just enough to retire, but after winning the WWF Title from The Iron Sheik in January 1984, one good year turned into two, two turned into three, and three turned into ten. With Hogan as his champion, McMahon finally took the WWF national, crossing the long-standing territorial divides wrestling had been built on for decades. Tales that Hogan had a gun shoved down his throat over it whilst touring Puerto Rico are more than a touch fanciful, as are his claims that he had to carry the whole promotion on his back, which I’m sure the likes of Andre, Roddy Piper, Jimmy Snuka and Greg Valentine would have been thrilled to hear. In stark contrast, Ric Flair on his Ultimate Collection DVD set goes out of his way to share the credit for JCP’s success with Dusty Rhodes, Terry Funk, Barry Windham and Ricky Steamboat.

That sets the stage for the birth of WrestleMania, leading into Hogan going on a bizarre soliloquy about how much money they could have made had Piper done the job for him “instead of just messing around”. Onto WrestleMania 2 and King Kong Bundy, who Hogan politely calls stiff, and then it’s the mega money main event run with turncoat Paul Orndorff in 1986, which Hogan claims worked because they went to rival schools in Florida, which Orndorff contradicts in a 2002 shoot interview with RF Video where he admits to having barely even heard of Hogan until they met in the WWF. That leads to clips from their famous “double exit” cage match on Saturday Night’s Main Event, but they don’t even bother to show the finish.

Hogan talks about being so scared of wrestling Andre that he’d actually throw up before their matches, but ludicrously claims he earnt the Giant’s respect after taking care of master shooter Tatsumi Fujinami in a real fight. What pure nonsense. That sets up WrestleMania III and the body slam heard ‘round the world, then Vince introduces him to Randy Savage, with Hogan basically taking the credit for Savage’s glittery robes and bandanas. Onto the deterioration of their friendship, Hogan recalls that Elizabeth wanted a divorce, and went to stay with Hogan’s wife Linda while he was away shooting Mr. Nanny, with Savage blaming Hogan for her leaving.

By the early 90s, Vince told him Hulkamania was winding down, which he understood but found hard to take. The idea that everyone thought he was told old by that point seems incredibly naive in hindsight, but it’s fair to say that the shirt-tearing, ear-cupping routine was totally played out by then. Hogan heads south to WCW, which they falsely claim was lagging behind the WWF in the ratings until Eric Bischoff hit upon the idea of the nWo (in fact, WCW and the WWF were more-or-less neck-and-neck in the ratings until WCW pulled way ahead for the best part of two years following Hogan’s heel turn), with Hogan credited as the reason big stars like Lex Luger and The Nasty Boys began to flock there (all three had already been, or were already with WCW by the time Hogan showed up, of course). Savage came in a little while later after apologising for going crazy over the break-up of his marriage, but after splitting from new squeeze Gorgeous George (about five years later) he blamed Hogan again.

Hogan spouts a few platitudes about the nWo, the success of which he credits completely to himself, and brazenly talks about how much fun it was wiping out their entire talent pool. He claims he was basically counter-programming Nitro against RAW, though stops just short of claiming he was booking the entire promotion, and the whole thing worked so well that Bischoff got sent home and Vince Russo came in, who was so inept at his job that Hogan thought he had to have been a spy sent by McMahon to destroy the company from within. All-knowing benevolent mastermind Hogan told everyone they had to stop making so many mistakes or they’d go out of business, but nobody listened, they went out of business, and everyone had to go crawling back to Vince and the WWF.

As graceful as ever, Hogan puts The Rock over almost as much as himself, with an inordinate amount of time devoted to their awesome first stare down on RAW and naff follow-up angles leading into WrestleMania X8. Hogan admits all he’s got is “three punches and a leg drop”, which is a rare moment of him actually underselling himself, but the whole point is just to brag about how well he knows what to do with them. Talk moves on to them having to abandon the nWo concept just a few weeks after their collective WWF debut because Hogan was so popular, and that leads to him verbally fellating Triple H in return for Hunter dropping the Undisputed Championship to him at Backlash. In truth, there really was a groundswell of support from WWF fans desperate to see Hogan as champion again, but once he got there everyone realised they now had to live with an ageing nostalgia act on top, and he dumped the strap to The Undertaker the next month at Judgment Day after the novelty had already worn off. That part isn’t covered here, and instead the documentary wraps up with a bunch of fans doing Hogan’s self-aggrandising for him at a Toys ‘R’ Us signing in Times Square, while Jerry Brisco returns to put Hogan over for transcending the business and inventing sports entertainment.