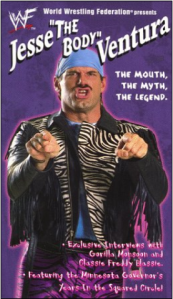 James Dixon: After years of being at odds with Jesse Ventura, suddenly the WWF were back to being bosom buddies with him as soon as he made it into government office as the Governor of Minnesota. Not that this is a shameless cash-in or anything…

To start things off, a rare talking head interview with Gorilla Monsoon, who is sadly looking rather frail compared to just a few years prior. Gorilla says Jesse was elected because of his past, and says he never in a thousand years expected he would become Governor. Freddy Blassie on the other hand, playfully says he was a “fucking goof”. Gorilla comments that Jesse was one of few men who could get away with wearing a feather boa, and he is right. Ventura could pull off any garish outfit, and the more outlandish he dressed the better he tended to look.

Gorilla moves on to Ventura’s history as a war veteran, with the interviews interspersed with footage of Jesse’s distinctive promos in his unmistakable booming voice. Only promos mind you, nothing in the ring. Why? Go back and read Volume #1; Ventura wasn’t exactly a technician between the ropes. He did look great though, the ‘Body’ tag was not an ironic nickname like Buddy Rose’s ‘Playboy’. Gorilla goes onto tell a story about Jesse turning up at a show on the evening of his wedding, and telling Gorilla that his wife is pissed with him. Gorilla questions why he is wrestling on his wedding night, and Ventura says: “I’m the main event!” Only in wrestling. Gorilla claims he put paid to that, and put Jesse on first. As nice a story as that is, not one iota of it is true. Ventura was married to long-term wife Terry in July 1975, the same year that he left the army and made his pro-wrestling debut and some half a decade prior to his first WWF appearances. I love Gorilla Monsoon, he is a credit to the business, but he really can spin quite the yarn.

“I feel sorry for those people up there in Minnesota” quips Blassie, who goes on to explain how Ventura was different to the usual type of guys he managed. He means camper. He tells a cute anecdote about Vince giving the order via Gorilla to Blassie that his wrestlers were to stay in the corner during the introductions so they weren’t in the way of the cameras, but Ventura had a tendency to walk around and pose in the middle of the ring, because he felt standing in the corner was beneath him. When Blassie was quizzed about it, he quite rightly asked: “Yeah, well, whatcha gonna do? You want me to hog tie him?” Blassie was a great wit and a superb storyteller. It is a shame he didn’t feature more on the modern WWE bio DVDs before he died. Same with Gorilla, actually. Where the hell are all the other talking heads anyway? Two is not enough. I know this was 1998 and the WWF were still reluctant to fully go behind the curtain on these profile tapes, but they could have had a few others speak at least. Hell, some words from Jesse wouldn’t go amiss!

Finally some wrestling footage, with a Ventura in-ring montage set to some generic music. Gorilla calls Ventura’s style “unorthodox”, because he is being kind to his buddy. We follow a montage video with another montage video, this one focussing on Ventura’s backbreaker submission hold. Gorilla gives us a biology lesson on the mechanics of the move, whereas Blassie buries Ventura’s use of it because it takes effort and time to set it up. He instead advocates a kick to the knackers.

I thought we were about to get some in-ring footage, but it turns out to just be the arm wrestling angle/match with Ivan Putski. As far as arm wrestling angles go though, it doesn’t get much better than this one, with both guys doing very well in bringing drama and excitement to the limited story they have to tell. It is a wonderfully executed piece of business and set the benchmark for future arm wrestling angles. At this stage I would still rather see some actual in-ring wrestling though.

Gorilla talks about how Jesse knew it was the right time to retire from in-ring competition, but the reasons why are skirted over. In reality Jesse didn’t have much choice but to call it quits due to blood clots in his lungs that he claims were the result of exposure to Agent Orange (a chemical weapon used by the US army) during his time in the Vietnam War. No reference either, is made to Jesse’s ill-advised and ultimately failed comeback attempt in 1985 where a proposed feud with Bruno Sammartino was nixed, reportedly because Sammartino refused to even consider putting Ventura over, as was the plan. Sammartino and Ventura were from two very different generations of wrestler, with Bruno a legitimate tough guy and credible athlete, but Ventura more a showman, an eccentric over-the-top cartoon. From what I understand, this was one of many incidents that caused Bruno to realise the WWF was going in a completely different direction to where he was willing to go.

All of that aside, the decision to give up wrestling and become a commentator was the best thing Ventura ever did. His key attribute as a performer was always his incredible voice, and his knowledge and understanding of the business made him one of the undisputed all-time great colour men to sit behind the announce desk. Ventura was a veritable master of justifying the actions of the heels, getting over the story of the match being told in the ring, discussing the mechanics of the moves, disputing dodgy referee calls and generally making the whole spectacle of wrestling that much bigger and more vibrant. He is worlds better than anyone that followed, and if you compare him to more modern pretenders such as Jerry Lawler or Stan Lane, it is laughable just how far short they fall of Ventura’s verbal greatness. That is hardly made apparent here though, with the WWF instead preferring to go with a mild burial job, as Gorilla emphasises how terrified Ventura was calling the first WrestleMania. Gorilla claims that when the cameras weren’t on them, he was “literally holding Ventura up by the back of his jacket” because he was shaking. I don’t buy it. Ventura does not strike me as someone who has or indeed ever would suffer from nerves. Even if he was nervous, I think the story is another example of Gorilla’s propensity to embellish the truth. Or lie.

Freddie Blassie somewhat buries Ventura for his tendency to mention his time as a Navy SEAL. Blassie says Jesse acted like he was the only person who had ever been in the Navy, but he himself was for three-and-a-half years. Blassie says he was told that the war was nearly over and he wouldn’t have to do anything, but when he joined that wasn’t the case. He claims to have been brainwashed, “just like those people in Minnesota”. It seems that the WWF is quite happy to cash in on Ventura’s newfound success and credibility as Governor of Minnesota, but will still gleefully dig at him all the way.

With his crippling “stage fright” seemingly overcome, Ventura has no such issues doing some posing at WrestleMania IV, to the delight of the Trump Plaza crowd. Ventura was hot at the time, with Hollywood having recognised his charisma and the marketability of his voice, and he was given memorable roles in Arnold Schwarzenegger vehicles Predator and The Running Man in 1987. Inevitably the WWF took things a step too far, and assumed that because Ventura was a great talker, he would also be a great singer. He wasn’t. Still, we get an airing of his debut music video on TNT, as he sings a frankly horrible song live on the show, with footage of him wrestling in the background. The song treats us to such lyrical delights as:

For the record, you haven’t lived until you have heard Jesse Ventura covering Barry McGuire’s 1960’s hit ‘Eve Of Destruction’. Go to YouTube and check it out at once!

For no conceivable reason, we are forced to watch footage of Uncle Elmer’s wedding, apparently due to Ventura’s commentary on the spectacle. This stuff all turned up on the first ever Coliseum release some thirteen years prior to this, so for it to turn up again in the late 90s is pretty wild. We quickly segue from that into highlights of Jesse commentating with Vince and generally belittling the boss at every given opportunity. Gorilla says Jesse was good at pointing out the flaws of others on commentary, and the editing is cheeky and clever as we cut to Ventura doing what he enjoys most: burying Hogan.

We close things out with both Gorilla and Blassie saying that Ventura is an honest, straight-shooting guy, but parrot the wishes of the WWF by saying the WWF made him what he is, and that the best thing he ever did for his career was become a wrestler. Isn’t it unlike the WWF to take credit for the success of someone else…?

Summary: There is not a lot here to work with, and in truth the WWF rather struggled to fill 40-minutes. Everyone knows Ventura was superior in every way as a commentator to any other aspect of his wrestling career, but a tape of him talking wouldn’t be particularly entertaining. The thing is, neither was this. To counter his lack of notable feuds and matches, the WWF instead interspersed the promos with the odd angle or interlude, but not much more. This could have been so much better, and a DVD release on Ventura in the modern era would likely include all of his Body Shop segments, some matches here and there (including AWA footage) and probably even mentions of his movies. At the very least there would be more than just two talking heads. Even as a fan of Jesse, this is nothing to get overly excited about and rather has the feel of something hurriedly put out there to try and profit on the buzz of Ventura’s election win. Give this one a miss.
Verdict: 25