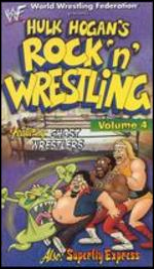 Lee Maughan: This is the fourth two-episode tape from the 1999 re-release of the 80’s cartoon series.

Summary: Two rather ridiculous plots this time, with endings almost as outrageous as the one found in 1984’s, ahem, “classic” slash-em-up Fatal Games. Superfly Express is almost like a Vince Russo-penned episode where they’ve come up with an intriguing premise and just gone with it, only figuring out the ending once they got there. As Marge Simpson would say, “It’s an ending, that’s enough.”

The amusingly referential Ghost Wrestlers is the winner this time out, although there are some curious continuity problems with the animation at one point. During the scene where all the wrestlers are helping the residents pack their belongings up to take them some place safe for the evening, Big John Studd can clearly be seen loading up the Hulkmobile despite not featuring in the episode, nor being part of Hogan’s crew. A ghostly apparition perhaps? Dogs and cats living together, mass hysteria!
Verdict: 49