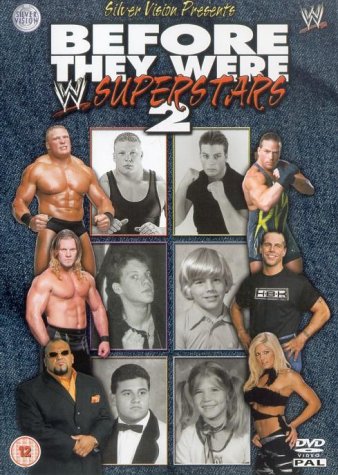 Arnold Furious: This is another of those delightful looks back at WWE wrestlers before they were WWE wrestlers. It’s always nice to get a little extra information on grapplers. The background adds to their personalities. However, given the mass of shoot interviews the world has seen over the years and some footage recycling, this might not be all it’s cracked up to be.

Brock Lesnar
Speaking of recycled footage, we kick off with Lesnar visiting his barber. It is nothing new, merely the same stuff as was used to fill the Brock DVD. That’s the problem with releasing a DVD so soon into someone’s career; they have done nothing and don’t have much to say. WWE have had similar problems with the likes of Kurt Angle and John Cena. Brock runs through his amateur career, complete with footage. The evolution of Brock as an amateur is scary because you see him grow from a scrawny kid to a monster. So kids, if you’re reading this and you want to look like Brock Lesnar… you’ve got to start early.

Tazz
His mother kicks this off by calling young Peter the “most mischievous little bitch”. Tazz came from a very tough neighbourhood but he wasn’t part of the trouble. He was a football player in high school, and thanks his Dad and coach  for his discipline. A trip back to his old school where he sees it’s been fixed up is a treat. Tazz’s way into wrestling was through Johnny Rodz. He was already a footballer and did judo so he was slightly prepared. Bill DeMott puts Tazz over for dominating him at Rodz’ place. Tazz broke into ECW in 1993, hired by Paul Heyman, as Paul E wanted some local talent. After a failed run as The Tasmaniac, Heyman cleverly booked Taz(z) as a 5’8” monster and reckons the fans would pick him to win almost any legit backstage fight. The boys wouldn’t. Another story about Tazz’s refusal to talk is a good one too.

John Cena
He puts himself over as a jackass who’d do anything to get a laugh. “My style of humour is extremely random”. Prior to wanting to be a wrestler John’s ambition was to be a rock star. But then he also was into hip hop and wore MC Hammer baggy pants in junior high. Cena always kept busy with his brothers, and they’d invite other kids over to the house to play sports in the yard. John’s grandfather was the big wrestling fan and Cena remembers being a Hulkamaniac since Hulk Hogan’s title win over The Iron Sheik in 1984, which he saw on MTV. A young adult Cena enjoyed showing off his body. “There was some tension and I’d just get naked”. At college he was more into football but moved to California when he graduated to become a bodybuilder. He’d started weightlifting when he was twelve, which like Brock Lesnar, shows you the benefits of starting young. The thing about Cena is he has so much natural charisma that even though he’s just talking about himself during this segment, it’s fascinating. Like a lot of bodybuilders it wasn’t long before he happened to be in the room with a wrestler and quickly made his mark in UPW as the robotic Prototype. “I don’t take life seriously at all” – Cena. He needs to look back at this.

Shawn Michaels
If you’ve read Shawn’s book, Heartbreak and Triumph, there’s not much new here. Shawn was the youngest of four kids but also one of the coolest guys in school. He was shy but could charm the ladies. Like most wrestlers he played football in school. Shawn started getting into wrestling at about twelve-years-old and wanted to do it for a living. Shawn became so obsessed with wrestling that he put on a match for the talent show in school. Shawn was convinced by “The Colonel” (his dad) to go to college but dropped out after one semester, not wanting to waste any more of his Dad’s cash. A local promoter put his family on to Jose Lothario who charged Shawn’s father $3000 to train him. Michaels didn’t take long to become a wrestler, and when he broke into the business he rapidly found a tag partner in Marty Jannetty. Shawn adds in the story about getting fired from the WWF on his first day during their first run. He doesn’t name any names this time around, possibly not wanting to start any issues with Jimmy Jack Funk (fellow Texan Jesse Barr) Let’s face it, Shawn’s memory is sketchy at times. Not as bad as Hulk Hogan’s but there’s a degree of mendacity also. Anyway, names aside, the story is identical to the one he’s told elsewhere.

Christopher Nowinski
This is the guy who banged on about being a Harvard graduate. To be fair to Nowinski, he went and worked the Indies after Tough Enough in order to get noticed and re-signed. His family are pretty funny, they call him boring and nerdy. They know he’s going to see this right? Nowinski reeling off stats about American sports and school means absolutely nothing to me. He goes on to talk about Harvard where one of his Gridiron teammates calls him “Pussinski” because he was “such a big pussy”. Nowinski’s tale about how his Mom thought “wrestling caused brain damage” is a remarkably unfortunate comment, seeing as Nowinski’s wrestling career was cut short by brain damage. In a sense it all turned out okay for him though, as he became one of the leading experts in the field of concussions and post-concussion syndrome, finally putting that Harvard education to good use. After college he went to train with Killer Kowalski but after three months Tough Enough started so he went in for it. Nowinski was the heel on Tough Enough, which is why he didn’t win.

Al Snow
Al launches right into talking about wrestling and seeing Georgia Championship Wrestling on TV, and how it made him determined to do that. Most of his piece is about being trained by Jim Lancaster and how it’s influenced his methods as a trainer. They have a lot of footage from Snow as a teenage wrestler too, in tiny venues in front of thirty people. There’s no clips of his better Indy work (opposite the likes of Sabu) and instead we skip ahead to Snow joining the WWF and getting given the Avatar gimmick. Snow had martial arts skill but says it “didn’t translate well to the ring”. The gimmick didn’t work at all and Al ended up sat at home for eight months. The next push was as Leif Cassidy, which also failed, and Snow was again left sitting at home. Snow was so frustrated he asked for his release, but he was instead loaned out to ECW, where he finally got the chance to express himself.

Randy Orton
He talks about always considering wrestling but when he turned eighteen he joined the Marines. He ended up going AWOL in the midst of a four-year stint and wound up in the brig. The Marines got rid of him and the WWE took a look after Bob Orton Jr. asked them to. As much as I dislike Randy, he was a natural. Wrestling came easy to him. Damn, he’s boring. He has almost nothing to say at this point in his career.

Chris Jericho
Jericho was a voracious reader as a kid and had a wild imagination. Like Cena he wanted to keep busy too, always running, playing sports, and swimming, depending on the time of the year. His high school friends remember him more for his love of music. It wasn’t long before he formed a band. One of the school chums credits a love of rock stars like Paul Stanley for Jericho’s promo style. A lot of this material comes from Jericho’s own DVD, and having read his books none of the information is new here either. Jericho skips over his Indy stint but mentions the various places he’s worked. Jericho has way too much journey to talk about to fit into one of these bite-sized segments. That’s even more obvious than the Shawn Michaels piece, because unlike Michaels, Jericho worked all over the place before the WWE.

Torrie Wilson
Torrie was a fitness model so she had no background before going straight into WCW as a valet. Everything about this is total fluff; animals and growing up in Idaho. Her three protective elders brothers stopped Torrie getting a boyfriend in high school, which probably benefitted her career as she didn’t get knocked up and stuck in Idaho. Torrie’s life-view is a bit limited; “I think all fourteen year old girls want to go into modelling”. There’s a fair-sized chunk about Torrie’s weight-loss issues and the eating disorder she developed from, guess what, modelling agencies telling her she looked fat.