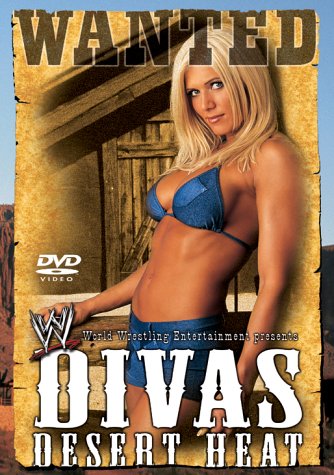 Lee Maughan: It’s always a mad scramble in the office at History of Wrestling HQ to claim the best tapes and DVDs whenever a new Complete WWE Guide comes around, with venomous arguments erupting over who gets to cover the likes of The Ultimate Ric Flair Collection and who gets lumbered with tosh like The Great American Bash 2004 (hint: muggins here was the poor sap who had it foisted upon him). Actually, the truth is that we’re a pretty fair bunch when it comes to divvying up both the gold and the crap, although one thing has always remained constant – none of us ever volunteer for the Divas releases, and they’re always the last to get done, usually under very begrudging duress and promises of “first bagsies” on the good stuff in the next volume. No, we at HoW Towers do not care for these lingering, go-nowhere profiles of WWE’s largely personality deficient Divas.

Or at least that was the case, until I stunned everyone into silence by raising my hand and calling out a claim on Divas Desert Heat. Why? Because it’s the only one of these annual annoyances that I actually own. Not through choice, mind you, nor as an unwanted Christmas present from an unwitting family member who thought they were doing me a favour. No, I actually picked up this slice of a skin thanks to a competition ran by WWE’s then-European distributors, SilverVision. Month after month SilverVision would give away DVDs to ten lucky people, and I figured the law of averages was such that, sooner or later, I’d get my grubby little hands on a copy of Mick Foley’s Greatest Hits & Misses or WrestleMania XX, all for nowt.

I’m sure you can imagine my surprise when a letter of congratulations plonked itself through my letterbox, triumph turning to tears when I quickly realised what I’d been sent. Star prize? It felt more like a booby prize. In more ways than one. Upon closer inspection, I realised that there might have been some actual value to the disc after all, for there in the top left-hand corner lay the squiggle of a genuine, authentic autograph from no less than Trish Stratus herself! Which must have been a right slap in the face for her; The bloody thing only has Torrie Wilson on the cover, hasn’t it? “Blonde? Big tits? Yeah, that must be her.” Nice one, lads.

Not only that, but upon yet closer inspection I realised the DVD also came packaged with a free Divas Wank-Mag. They actually refer to it as a “Mini-Mag”, but come on. Literally. Of course, in keeping with the Trish/Torrie theme, this is devoted entirely to… Lita, who I was never the biggest fan of as a worker, and who, if I can be a bit of a pig for a moment, never found particularly attractive either thanks to her skeletal cheekbones, rectangular jaw, gammy tattoo, and ludicrously big shoes. That being said, the mag does include a rather lovely snap of her wrapped in fairy lights with her tits dropping out of her shirt, so there is that.

Needless to say, I pulled my name from the SilverVision mailing list after this whole sorry travesty, and never attempted to win anything from them again, save for a SummerSlam 2009 poster. You had to submit your own piece of fan art to a message board, and it appeared that I was the frontrunner until some bitter prick kicked up a fuss about it not being drawn specifically for the contest, whining and complaining that I shouldn’t be allowed to win. I’m not sure why he cared so much considering he didn’t even submit his own entry, why it mattered that something I created wasn’t up his standards for the rules of a contest he wasn’t in charge of running, or why it mattered so much that I shouldn’t be one of the ten people to have a nice thing happen to me, but at least I’ve now been able to call this self-appointed nostril strain a cunt in print now. You cunt. And now on with the DVD, which twelve years later is genuinely the first time I’ve ever actually sat down to watch it.

In a change from the norm, the shoot is in the Phoenix desert this year, which Miss Jackie notes is devoid of water. So much for all those wet t-shirt shots then. Ivory puts it another way: “We love the Bahamas, don’t get me wrong, but we also love not having sand in our pants.” Things begin halfway up a mountain with Molly Holly, Trish, and a precariously perched cactus which almost does some serious arse damage. I wonder how often the Divas come in for a good pricking? I guess it just depends whether Batista’s around or not. Ivory whips her bra off and runs around an abandoned old western town demanding everyone take their clothes off and dance. “I’ve always been kind of a nutcase” she declares, and based on this evidence she’s not wrong. Both her grandmothers are dead, by the way. Well, that’s nice to know. Meanwhile, Victoria sees the sky through a hole in a rock and can’t believe her luck. Ah, a woman of simple pleasures. Elsewhere, Jacqueline seems to have missed the memo about making sure to sound as vapid as possible at all times, instead going on an amusing rant about nobody wanting to wrestle her: “You might get a broken leg, or a broken arm, or a broken nose, or a busted lip, or your teeth knocked out… But you know, accidents do happen!”

Back at the ranch where the curtains are drawn but the furniture’s real, nutball Ivory gets her stick out for the lads and pesters a rattlesnake with it, while Stacy Keibler goes hiking in a bikini. Later, Stacy, Trish and Terri Runnels take a jeep ride with a couple of cowboys, one of whom sticks a cactus in his arm before setting it on fire and eating it. You probably won’t be surprised to learn that he also once spent five days in intensive care after being bitten by a poisonous insect. Practical joker Trish decides to wind him up by claiming a scratch on her back is from him not driving carefully enough, while Terri’s boob almost falls out of her top on the way to a shooting range before she announces how hard her arse is. I didn’t know you could get an erection round there?

Unbelievably, the Divas all take a moment to put over the Sheraton Hotel, before contradicting the “no water” policy by taking pictures in the pool. Terri steals a buggy and goes for a drive around the golf course, then decides to go stand still in front of a wagon instead. Okay then. Jazz admits that her favourite day of the shoot is the last one, as the rest of the gang head out to a ghost town where Trish rides a train and Victoria appropriates a Native American headdress, but alas no ghosts are found. Crazy thrillseekers Victoria and Nidia go for a gentle paddle across a still, calm lake, then everyone grabs a gun and dicks around on a film set for a bit. It’s exactly as fascinating as it sounds. At this point the material gets so thin that they have to pad things out by having Torrie, Nidia and Jazz talk about their, *gasp!*, wrestling careers. Elsewhere, Torrie goes and sits behind a fence. Man, that girl sure knows how to have a good time. One of the cowboys returns to strangle an irritating mess of a so-called tune out of his banjo, while Torrie talks about how much fun it is to get dressed up… only to get completely undercut by saying it over a shot of her posing with her tits out. Thankfully after an hour that felt more like six, the whole electrifying feature wraps up with a montage of pictures set to a generic country and western dirge that sounds like it came right out of the songbook of Lurleen Lumpkin.