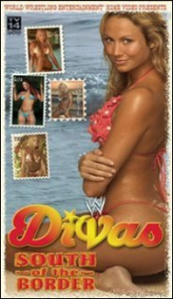 Arnold Furious: Normally these Diva releases get allocated out by James Dixon regardless of whether we want them or not, and yet merely two weeks away from our writing deadline for this volume, there sat Divas – South of the Border mysteriously unclaimed. Seeing as no one else seemed game I thought I’d man up and tackle it. How bad can it be? It’s only an hour long. But wait, what’s this? There are two hours of bonus matches too!? WWE are just spoiling me here.

If you’ve seen one of these Diva DVDs, you’ve seen them all. Sure the girls change, but it’s basically just female wrestlers in bikinis somewhere hot. A shameless tie-in/cash-in for the bikini edition of WWE Magazine. Jonathan Coachman presents it from the studio, and he’s about as irritating as you’d imagine.

– Lita has an actual tie to the locale because they’re in Mexico where she used to wrestle, although she quickly points out that she’s more used to a dirty city like Mexico City rather than a beach resort. She brings up her neck injury and how she missed the last two Diva shoots because of it. I wish she spoke more about lucha-libre, but instead it’s all about posing and wanting to be the Divas picked to be on the magazine cover (spoiler: it’s Torrie Wilson). So, nothing of note here.

– Any chance of getting anything useful out of Jackie Gayda goes straight out of the window when she immediately launches into talking about the photos. After a few seconds it’s just white noise. She has nothing interesting to say. There is one idiotic moment that stands out, which is her talking about having a “genuine laugh” when buying a sombrero. Just the one genuine chuckle while on holiday in Mexico under the guise of “work” then, love? You must be a barrel of laughs.

– Ivory at least seems to enjoy herself, talking about Mayan heritage, Mexican culture, and the local wildlife. Ivory always seems like a fun person to be around but I bet she’d be exhausting too. She describes the constant comments about photo shoots making her sick, which segues right into a shot of her on their final day where she looks thrilled to be done with it. Wrestling!

– Victoria amuses me by standing off camera shaking her head while Trish, who she was feuding with, gets photographed. Stacy Keibler tells her to stop being so serious. The various comments about posing and photography are now getting mind-numbingly dull.

– Trish Stratus takes a slightly different tack, as she’s been at a million photo shoots by this point and prefers to talk about the camaraderie between the girls. When she does get around to talking about the posing being more relaxed because Mexico is more relaxed, even that makes sense because she’s such a pro. Certain people can just draw other people to them and Trish is so outstanding at this you can see why she became such a big star. If she wasn’t a wrestler she’d have been a star at something else.

– This isn’t really Nidia’s strength but she says she feels more comfortable this year than she did in the past. In every single shot of her she’s goofing around, including a shot of her dancing on the plane. Every time I see Nidia I wonder why WWE decided to let her go. She had an infectious personality. Maybe the boys in the office didn’t like her body or the whole trailer park deal. For me, she always came across as quite genuine, so it’s nice to see the real her being exactly the same.

– Jacqueline has a really slow, laid back speech pattern when she’s not cutting promos. It gently washes over me like the waves of the ocean on the Mexican beach. It’s a pity she doesn’t have much to say.

– Conversely, Sable thinks she has a lot to say, as the group veteran, but she really doesn’t. When the Divas are in a group you can see her trying like hell to not act naturally, as that’ll make her look older. She’s hitting this serious pose and everyone else is having fun. She must have been a nightmare to work with. She’s also very aware of where the cameras are. The one thing she does say that I agree with is that you need to be confident to survive in WWE. Although her confidence far too often extends a little toward arrogance.

– Gail Kim talks about her inexperience in terms of posing, because she’s a wrestler first and foremost, but she’s a natural at just looking good by doing nothing. “I’m not good at smiling, I feel fake.” I suddenly love Gail Kim and, at the same time, realise why her WWE career was cut short. Gail is also the only one who doesn’t seem to care about the cover, which has been mentioned repeatedly by everyone else. I came out of this short chat with her a much bigger fan.

– Like Ivory, Molly Holly is really into Mexico as a place, so she went off the beaten track to check out the local people. She puts over Ivory for keeping her amused during an otherwise grating photo shoot. She also puts over WWE for not making this photo shoot so structured, encouraging individuality and more down time. Which doesn’t sound like typical WWE at all.

– To the surprise of no one, Stacy Keibler prefers the beach. I don’t get the beach; it’s where dirt meets water (thank you, Bill Hicks). Like Lita and Ivory, she is excited about getting the chance to see wildlife at Parque Xcaret. Stacy seems nice enough, but the talk about swimsuits and posing is more of the same repetitive tedium.

– Dawn Marie has a weird opinion about being “nearly naked” in public. Somehow she gets more nervous about it away from wrestling, because that’s a stage. At this point the whole DVD is grinding at me. It’s all the same thing, over and over again.

– Jazz blames a knee injury for her poor showing in last year’s shoot, as she couldn’t work out to get in shape for it. The military bikini she is wearing really suits her. “What you see is what you get. That’s what I am”. She’s pleased to get a break from work, but still feels the urge to talk about the business. That is why I like her, because she’s a wrestler. “It’s good to be different”. How does that line go? You laugh at me because I’m different, I laugh at you because you’re all the same.

– Wait, we are not finished yet!? How many Divas did WWE employ for this shoot? Like all of the other Divas have, Torrie Wilson buries the shoot in the desert from last year. I get the feeling they really hated Desert Heat? Anyway, she talks about swimsuits and photographers, and it’s boring.

Before we go out we get Sable and Torrie Wilson singing ‘Copacabana’, a song they DON’T KNOW THE WORDS TO. You have no idea how annoying this is to me.