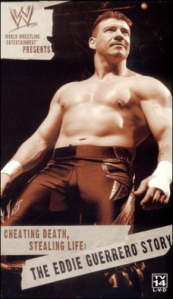 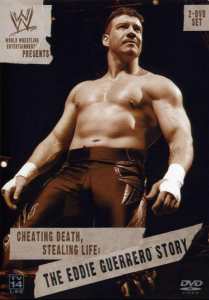 Arnold Furious: During the course of these books I’ve made it abundantly clear what a massive Eddie Guerrero mark I was and still am. He’s one of those rare wrestlers with everything in his locker. Eddie could talk, he could get over dumb angles, he could wrestle just about every style imaginable, and he was an iconic figure for a generation of wrestling fans. I’m pleased that Eddie had the chance to become World Champion and get the respect he deserved while he was still alive to enjoy the adulation. This DVD charts Eddie’s career and life, both of which are intriguing.

The DVD starts out with some details of Eddie’s youth and the wrestling family he came from. The best part, for me, is Eddie dropping the accent he does on TV and talking normally about how quiet he is. Some people can switch their personalities on and off. It’s a gift. Eddie also has a great fondness for his hometown of El Paso and the family business. I love one story about Eddie and his nephew Chavo Guerrero wrestling during the intermissions of his Dad’s shows when they were just kids. It makes the Los Guerreros segments feel even more warming.

The actual documentary is a bit patchy, in terms of content as it skips from wrestling to low-riders to Hispanic culture to Eddie meeting his wife Vickie. He married Vickie in 1990, before he’d really broken into the business (he’d been a pro for about three years). We skip ahead to wrestling in Japan, working with Chris Benoit and his series in ECW with Dean Malenko in 1995. We skip ahead even further to the classic match pitting Eddie against Rey Mysterio at Halloween Havoc ’97 in WCW. When Eddie first got into WCW everything was going good, but soon the thrill had gone and he turned to alcohol and drugs.

We fast forward to 1999 where Eddie went driving after taking sleeping pills. He crashed his car while travelling at 130mph and everyone thought he was going to die. When he pulled through the doctors told him he’d never wrestle again, and that he might not even be able to walk after breaking his hip. Eddie was back in the ring only six months later and found himself addicted to pain pills. He overdosed and nearly died, again. A few months later, at his parents house for Christmas, he overdosed again. Eddie had nearly died three times in a year.

From there we skip ahead to Eddie jumping to WWE with The Radicalz. Eddie really got his personality over in the WWE doing the Latino Heat gimmick and everyone in the family loved it. The best part of the documentary is a revelation that Dean Malenko brings to the viewers; that he and Benoit had gone to Jim Ross’ WWE office and warned them that Eddie was a ticking time bomb. Guerrero had been sent to rehab, before being released after picking up a DUI. They tell Eddie about this on the DVD and tears start pouring down his face. It was the final straw that got Eddie back from the brink.

2002: Eddie had no job, no money, and lost his family, but he was clean and alive. WWE re-hired him and Vickie took him back. Vince McMahon’s whole, “I believe in second chances,” speech is beautiful. Having his presence as a talking head adds so much. After being re-hired Eddie got paired up with Chavo as Los Guerreros and the whole “lie, cheat and steal” gimmick. From there we get talk of the frog splash and how Eddie borrowed it from his former tag partner Art Barr. After that we skip go to Eddie’s World Title win over Brock Lesnar at No Way Out 2004. The victory was his official redemption; the opportunity to carry a World Title. It’s one of my happiest memories as a wrestling fan. That’s how we round out the documentary.

As far as documentaries go, it’s fairly well structured but they were way too many little bits and pieces that didn’t fit into the story. WWE tried desperately to cram everything in there. The core of the storyline; Eddie’s drink and drug problems, overcoming them, and his home life are well worth seeing though. It’s an emotional rollercoaster. A shame the DVD skips over so much of the wrestling. I’m glad they mentioned the Dean Malenko series in ECW, and NJPW is covered briefly too, but there’s not a lot of footage. Luckily there are extras detailing a lot of the matches.