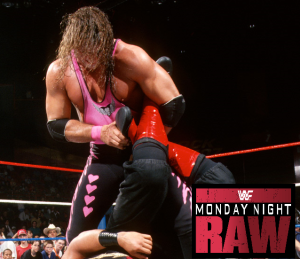 James Dixon: Because it was just SO funny (hell, it even made DVD release years later), we open the show with footage of Jerry Lawler falling/being dropped off his throne last week. With the promise of more cutting edge action like that, Raw is not to be missed! Vince is joined by Randy Savage, which suggests to me he has returned to commentary full time and thus puts an end to the cavalcade of guest hosts. Savage lobbies Vince live on air for a WWF title match with Bret Hart. Just BOOK IT Vince, dammit!

Bret Hart vs. Kwang
Oh no, instead you book this! This is a non-title match, because Kwang is, well, Kwang. For those unfamiliar with Kwang, he was basically a fat ninja in a mask, and had more success in later years as Savio Vega. Vince calls the mist that he spits “green slime”, which is just a silly comment. Slime is viscous and sticky, mist disperses into the air. If they were the same thing, then The Ghostbusters wouldn’t have had any problems with Slimer. The crowd are fairly into this, even though Kwang was not considered a realistic threat by anyone, title on the line or not. Owen Hart is interviewed via telephone and tries to hype his match with Bret at SummerSlam, only for Vince to rudely shout “ONE, TWO…” over him not once, but twice, as Bret gets near falls. No wonder Owen felt like he was in Bret’s shadow. Bret wins with the Sharpshooter in a routine Bret TV match. Not good, not bad.
Final Rating: **

Jeff Jarrett vs. PJ Walker
Hey, it’s Double-J against Blow-J! See the 1993 edition of this series, folks. PJ looks buff; he has put on a lot of muscle since his first appearance on Raw early last year. I’m sure it was that, rather than his Kliq affiliation, that got him his push as Aldo Montoya. Vince and Savage spend an inordinate amount of time discussing the love-life of Roseanne Barr. I have to say, that is the last thing I expected to hear. Savage continues to lobby for a title shot against Bret, which Vince thinks is a great idea. Obviously not great enough to make it happen, but a great idea nevertheless. Sometime it would be nice if Vince went with some of these great ideas in 1994, rather than the unstoppable wave of silliness and hokey mouseshit that he did give the “ok” to. This match is boring, because Jeff Jarrett in 1994 was boring, and Vince amuses himself by talking about Bill Clinton and his love of glamour girls. Jarrett finally wins it, and that was one of those matches where you watch and watch but nothing registers, because it is all just going through the motions.
Final Rating: ½*

The Steiner Brothers vs. Mike Khoury & Barry Hardy
I am delighted to see The Steiners back on Raw killing jobbers, it has been too long. Scott’s first move of interest/amusement is a dragon suplex, which Mike Khoury bumps hard on his head. He doesn’t roll, he just folds like an accordion. Scott throws in a t-bone on Hardy then lets Rick come in and have his fun. Vince plants the seeds of a Steiners split and possible singles feud, but obviously and unfortunately, that never transpired. I wonder if they would have hit each other as hard as they hit everyone else. This is just a scurfy pummelling from The Steiners, and you almost feel sorry for Barry Hardy. Almost. I am not going to comment on Vince SINGING over the top of the match. What has got into him tonight!? Scott uses an Angle Slam off the middle rope of all things, then gets bored of Hardy and brings Khoury back in for the match winning Steiner Screwdriver. He just throws it into the match casually like it was a goddamn clothesline or something. You know, we always talk about how Scott Steiner was a beast in the ring and murderized jobbers, but rather surprisingly when we asked Glenn Ruth about who hit him harder out of the two, he said it was Rick. This was standard Steiners fare against jobbers, which is not a criticism, believe me. That was probably the longest 5-minutes of Hardy and Khoury’s collective lives.
Final Rating: **

Video Control brings us a Duke ‘The Dumpster’ Droese vignette. He is a garbage man, which was about the only vocation left that the WWF didn’t have covered. “I don’t take garbage from anyone, well, yeah I do…” Winner.

The King’s Court
Two weeks running!? C’mon man! Look, I respect Jerry Lawler’s contributions to the business and his multiple achievements in wrestling, but I attest that he did near enough nothing of interest or anything particularly entertaining in the WWF. Alundra Blayze is the guest this week, and her monotone delivery makes this tough to sit through. She sounds a lot like Linda McMahon actually. Alundra claims King’s Court is just a Piper’s Pit rip-off, which it is, only no-where near as memorable. Alundra insinuates that Lawler is a cross-dresser and stole her belt, so Lawler brings out Luna Vachon. Luna denies stealing the belt as well, and frightens everyone, me included, in the process. Her promos were just terrifying. “You are a closet champion” says Alundra. I think she is angry, it is hard to tell. Maybe she is happy… I just don’t know. Hey, Alundra, put some emotion into your voice! What exactly IS a closet champion? Anyway lesson learned: don’t let Alundra Blayze do promos.

Earthquake vs. Mike Bell
Mike Bell went to the same school as Crush, because he is just as dumb, challenging Quake to a test of strength. Bell is too short, so goes up top to try it but gets flung across the ring. Logically, why would you ever try that against someone double your size? Quake chases Bell around the ring and after letting him hit some stomps, he hits two standing dropkicks. Honestly! A belly-to-belly suplex follows that, as Earthquake is clearly trying to impress someone. Good on him for trying to better himself and be more than just an insufferable lug. I am looking at you, Mabel. Vince salivates over the prospect of a Yokozuna vs. Earthquake match. If he wants to see it so bad he should just pop in a copy of Invasion of the Bodyslammers. Quake wins it with the Vertical Splash, as Vince calls it a “humiliation” for Bell. I think that is a little harsh.
Final Rating: *

Video Control gives us footage from Superstars of IRS fiddling with Tatanka’s feathers and Kwang spitting “green slime” in his face. IRS rips the feathers in front of a tied up Tatanka, because he “didn’t pay the gift tax”. Chief Jay Strongbow waddles to the ring to save Tatanka’s precious feather boa, and he gets a slapping too. The angle actually looks fairly fun in highlight form and Furious has a fondness for it, but don’t be fooled; IRS is involved and it is over some FEATHERS. It sucks.

IRS vs. Major Yates
Darnell ‘Major’ Yates worked on and off as an enhancement guy for 5-years, but then tried his hand at bodybuilding. I tell you, if he looked like he does doing that here, he would be winning this match. He would be winning EVERY match. Look him up on Google if you don’t believe me. I pretty much made the decision to boycott all IRS squash matches after watching his woeful performances in 1993, and my stance hasn’t changed. Neither has IRS, unfortunately.
Final Rating: ¼*

Johnny Polo complains about Lou Albano politicking Jack Tunney for a Headshrinkers tag title match against The Quebecers, so promises to pay Tunney a visit to put things right.

Next week, Nikolai Volkoff is on King’s Court (yowser!) and Razor Ramon takes on Jeff Jarrett. Randy Savage can’t choose between them so settles on “both of them” to win. Vince is perturbed.

Most Entertaining: Scott Steiner. He wins it every time he appears.

Least Entertaining: IRS. He wins it every time he appears.

Quote of the Night: “Whenever he (Jarrett) is embarrassed he really becomes vindictive, though apparently he has something in common with President of the United States, Bill Clinton” – Vince McMahon, Republican.

Match of the Night: The Steiner Brothers vs. Mike Khoury & Barry Hardy. Ok so it was just a squash, but it was more fun than the “marquee” match between Bret and Kwang. Plus, I cannot give this award to Kwang. Ever! I mean, “Kwang” is the noise a sex gong makes!

Summary: This show just sort of meanders along, with no-one really paying much attention. Vince and Savage talked about everything except what was going on in front of them, even though the action this week was fairly consistently solid. Of course, ending on the sour note that is IRS doesn’t help this show’s cause. It is yet another Raw that doesn’t flat out suck, but again offers nothing to hold interest. This show NEEDS a great match and it needs it soon. The streak continues…
Verdict: 24