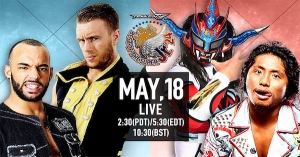 Arnold Furious: We’re in Tokyo, Japan at Korakuen Hall for night two of the 2017 Best of the Super Juniors tournament. Much like during the G1 I got behind immediately and it’s a massive struggle to ever catch up. And I guarantee as soon as I do, WWE will schedule a PPV, or a UK special, or an Takeover (or all three, hello this weekend) and a UK tournament will completely wipe out my weekend. Oh well. That’s (wrestling) life*. Unlike night one, tonight focuses strictly on the A Block, which is, on paper, the stronger block anyway so that’s fine. The first half, in lieu of Block matches, is a combination of miscellaneous, pointless non-cruiser action.

*Even by my ‘oops, I’m late’ standards this is quite late. Blame real life shit.

Tiger Mask IV, Hirai Kawato & Tomoyuki Oka vs. Katsuya Kitamura, Shota Umino & Tetsuhiro Yagi
Tetsuhiro what now? New Japan have yet another Young Lion ring-ready. Are they literally growing them in a factory somewhere? Maybe “ring ready” is a stretch and Umino and Yagi are falling over each other like a couple of clowns almost immediately. Tiger Mask, boring though he usually is, decides to completely stop selling for them and goes off on a wild kick rampage. Know your role, children! Learn to walk before trying to run. There’s nothing more distressing, in a wrestling ring, than a young wrestler who’s lost where he is. No doubt the beatings will be severe in the NJ Dojo this week. Manabu Nakanishi is going to slap the shit out of these little bastards. Seven hours of bump drills today lads. Kawato gets the tap out with the Young Boy murdering Boston Crab.
Final Rating: *1/2

Suzuki-gun (Yoshinobu Kanemaru & El Desperado) vs. Volador Jr & ACH
SKG bring a bottle of tequila to the ring. Oh no, Gedo is taking booking tips from f*ck*ng Vince Russo. Then there’s ACH, who I love. He’s adopted the new nickname of Midnight Cannonball. My word, that’s tremendous. The SZG lads are in dickish form and Despy even uses Milano’s phone! ACH in response punches Kanemaru in the penis. Volador and ACH are probably both in the hunt for more regular New Japan gigs and it’s ACH who looks more excited at the prospect here. Volador looks downright disinterested at times. The Suzuki-gun boys cheat and ACH gets himself pinned thanks to the tequila, which the commentators call “whiskey”, clearly missing the racial point of it.
Final Rating: **1/4

Bullet Club (Guerrillas of Destiny & Yujiro Takahashi) vs. War Machine & David Finlay
No girl for Yujiro, confirming this as a ‘B show’. Our David is all painted up to look like a Road Machine Warrior. GOD vs. War Machine is happening at Dominion so they need to hype GOD’s chances of winning by having them look good here. While I understand that has to happen, for the good of the dynamic, I don’t like War Machine getting beaten up in the slightest. It takes away from their aura. Much like the Road Warriors back in the day or Authors of Pain in NXT. A big dominant tag team should dominate. Kudos to New Japan for sticking the belts on War Machine but they should make beating them look hard so everyone finds it difficult to do so. Like the Undertaker or Brock Lesnar. You make someone look unbeatable over a long period of time and it creates the illusion that they cannot lose and when they do lose it means something. GOD got way too much here, plus the pinfall win on Finlay.
Final Rating: **

Satoshi Kojima, Juice Robinson, Ryusuke Taguchi & KUSHIDA vs. Los Ingobernables de Japon (Tetsuya Naito, EVIL, SANADA & BUSHI)
Hiroshi Tanahashi was supposed to be in this match but he’s torn his bicep and won’t wrestle again until Dominion. You can tell this group are new to the ‘Taguchi Japan’ team photo because Juice twats KUSHIDA with his dreadlocks.

Taguchi can milk a pose like no one else in the business. I love the Taguchi Japan team photos. Every single one of them makes for an awesome screenshot. Meanwhile Naito is making GIFFers lives easier by f*ck*ng up the IC title at every available opportunity. It looks like he absolutely loathes that belt.

Naito’s destruction of New Japan property and Taguchi’s organising ace group photos are where the match peaks. Everything else is just window dressing. Although SANADA is definitely on his game, tying Taguchi in the ropes and then kicking the ropes into Kojima’s balls in the middle of his signature elbow drop set up. He also side-steps Taguchi’s flying hip attack and throws KUSHIDA around like he’s hurling his bin bags out after tea time. BUSHI pins KUSHIDA, as KUSHIDA is apparently job proof, and we get heated with BUSHI continuing to put the boots in after the bell has rung.
Final Rating: ***

Post-Match: What an asshole! Naito throws the belt so hard at the ring post that it bends and the Young Lions have to grab the ring hammer to beat it back into shape. The crowd reaction to the shot of the damaged belt is one of utter shock before they have a good chuckle at the Lions attempts to fix it.

BOSJ Block A
Taichi vs. TAKA Michinoku
Suzuki-gun explode! Or they would if either one of them was prepared to make contact. My video actually froze during their stalling and I didn’t notice. They actually tell a good story, based on how familiar they are with each other. I can see how some people would hate it because there is a lot of stalling. It’s Taichi’s way of telling TAKA to take a night off and recuperate. When that’s over they have a little competition to see who can cheat the most. It plays off their characters nicely. Taichi wins the game by virtue of faking a knee injury. What an asshole. TAKA’s little smirk afterwards shows that he appreciates his comrades ruse. Even El Desperado, cornering Michinoku, finds it funny. They are a pack of dickheads. No wonder I hate this stable.
Final Rating: *1/2

BOSJ Block A
Dragon Lee vs. Marty Scurll
Two nights into his New Japan run and the crowd are seriously into Marty’s entrance music. There is an audible “let’s go Villain” chant. What is happening? Wrestling has gone all insane and I’m so in the bubble that I don’t know if I should be freaked out or not. Scurll lives on shtick here, and is able to engage with the Tokyoites effortlessly. He’s done masterful work over the past three years developing character and interweaving it into everything he does. All while improving as a performer. Here he’s aware that Dragon Lee is over on his high spots and purposefully avoids big spots himself, allowing Lee to be over for his strengths. All of Scurll’s shtick gets solid reactions including the “superkick…just kidding”, the finger-snap and “Chickenwing”. That didn’t take long! Cracking Tokyo is the easiest part of getting over in Japan though. The true test is how they react to you on the tours. That takes time. Everything gets over here and Dragon Lee is able to win leaving Scurll looking strong. It’s from a desperation headbutt and a double stomp off the top. Scurll walks away looking good and Lee walks away with an extra point to his BOSJ campaign. Excellent work from both here, without killing themselves.
Final Rating: ***1/2

BOSJ Block A
Jushin Liger vs. Hiromu Takahashi
Liger starts fast as hell. He’s out to smash Hiromu and take his title because there is tomorrow. This is Liger’s last BOSJ and he means to leave a mark upon it. The way he mistreats the companies leading junior is very impressive. Unless you’d followed him for his entire career you’d have a hard time believing he was fifty years old. It appears as if he’s been saving himself for this tournament, intent on going out on a high.

Hiromu is gracious enough to take all of Liger’s abuse and make the veteran look like he’s permanently on the verge of beating the Junior Ace (and one of the world’s best wrestlers). That is until Hiromu pulls out the Timebomb for the win. Hiromu gave Liger a tonne in this match, routinely taking a thrashing until the finish. For an eight minute sprint this was wonderful.
Final Rating: ***1/2

BOSJ Block A
Will Ospreay vs. Ricochet
This is a repeat of the much talked about BOSJ match from 2016, which got Twitter abuzz with chatter regarding selling and resulted in Ospreay main eventing York Hall against Vader. Ospreay and Ricochet have worked quite a bit since then, modifying and changing their interactions. It’s not just about that double backflip spot. A year ago they had a high octane match that was over quickly. Here it’s a different story, building slowly and showing that Ospreay has learned from his experiences in Japan. They still have sequences but they feel even more organic and while they’re most definitely pre-planned the fluidity is astonishing. They do throw the little backflip pose in there but it feels like more of a nod to the first match than part of this one. Once they’ve gotten that out of the way it’s into the business of doing something new. It’s perhaps their most considered contest to date, keeping flipz to a minimum to tell a deeper story about recognition and speed. They’re both aware the opponent is fast, so they need to be faster, quicker to the punch. The thirty minute time limit comes into play during the course of the match, with the two wrestlers being comparative equals. There’s a chance that the contest could go the full thirty. It’s something New Japan have done (Okada-Tanashashi) in order to sell the close nature of major feuds. I like that as the match advances they start to show how ineffective normal massive spots are as they both flip out of potentially match ending scenarios. This escalates into Ricochet abusing Will on the apron. IT’S THE HARDEST PART OF THE RING.

When a count out does not occur Ricochet steps it up into move theft. He was quoted, being a bell-end on Twitter, as saying he used to do the fade cutter years before Ospreay starting using it. They even switch up existing moves with Ospreay doing the Cheeky Nandos from the apron and popping off a springboard Dragonrana! That should really finish but when Ricochet kicks out he’s met with the Oscutter and Ospreay picks up the win in 27-ish minutes.

This was a highly anticipated re-match from last year’s tournament and although it lacked the intensity and fire of that shorter match it nevertheless delivered on thrills, spills and a whole lot more. Ospreay looked great here.
Final Rating: ****1/2

Summary: You can probably skip over most of the show but the last three matches are gold.
Verdict: 71