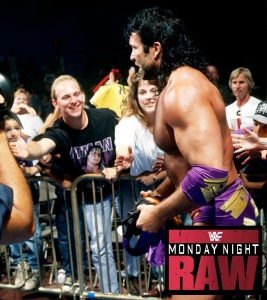 Arnold Furious: We’re in Bushkill, Pennsylvania. Part of a massive three week taping. The schedule for this one follows the newish format of a marquee match to lead off followed by four squashes. Hosts are Jim Ross and Randy Savage, who debate whether Lex Luger has sold out.

WWF Intercontinental Championship
Diesel (c) vs. Lex Luger
The champ comes out first and is accompanied by Shawn Michaels. Ted DiBiase has already claimed Luger’s soul, so the reaction for him is mixed and Diesel is getting face pops so that skews the crowd for this match. It makes it Attitude-esque with the lines blurred. Diesel would go full-on face about four months from this show, while Luger would reaffirm his face status by having Tatanka turn heel on him. Of course Luger had already lost most of his heat by being such a choke-artist. Both these guys have a horrible reputation for dogging matches, mostly earned by a series of horrendously lazy performances in WCW, but they’re both feeling it here; Luger even takes a bump on the floor and Diesel leaves his feet. I suppose it does help that Shawn is running around the ring causing mischief. Luger takes some safe looking bumps back inside like the snake eyes with two handfuls of ropes for support and getting choked on the ropes across his chest. When Diesel does resort to rest holds, the camera checks out Shawn who puts more energy into the escape than Luger, hushing the fans down and jumping around. Luger takes a sweet big boot off the big man. The kids chant “USA” in support of EVERYONE. Both wrestlers, the manager, the ref, the timekeeper, the announcer, the commentators, ICOPRO. It’s all USA. Incidentally; ICOPRO? What madman would push a supplements program when he’s on trial for steroid distribution? Vince McMahon was either dumb as shit or had enormous balls. Probably both. Diesel isn’t quite sure how to sell Luger’s stuff and spends most of the match wobbling around. The problem with being really tall is the difficulty of effective and realistic selling. Diesel’s at this stage of his career was halfway to Giant Gonzalez. The ref gets bumped with Luger having the Torture Rack on, so Shawn jumps in and superkicks the challenger. I like that Diesel struggles afterwards as he’s selling the back from the Rack. That brings out Razor Ramon as the wrestlers slug away at each other. Everyone ends up fighting in the ring and that’s a DQ. The match was ok, especially considering who was involved, and was fairly energetic. Ted DiBiase sticks his nose through the curtain after the verdict is delivered and seems upset that Luger failed to win the strap.
Final Rating: **½

Mabel vs. Austin Steele
If you ever wanted to see Viscera vs. Buddy Landel, this is the match for you. Mabel dominates so much that he even has time to dance. Steele takes advantage by climbing the buckles but gets wiped out with ease. Mabel starts the crowd in a chant of “whoomp, there it is”. I still hate that song. Bossman Slam finishes.
Final Rating: ¼*

Owen Hart vs. Reno Riggins
Savage stops off to shoot on Anna Nicole Smith, essentially calling her a fat gold-digger, in an attempt to be topical. Reno is a good worker so this might be decent. I know they’re insistent on making the squashes quicker these days, but this would benefit from 7-8 minutes. It won’t get them. They do some pretty technical stuff, which is going 50-50, so Owen slaps Reno in the face. Owen isn’t his usual vivacious self and Reno returns the slap with interest. Reno runs right into the belly-to-belly and Owen finishes with the Sharpshooter. “Too far away from the ropes to grab THEEEEYUM” – Savage strikes again.
Final Rating: *½

Sparky Plugg vs. George South
George South looks like a mini Jake Roberts. It’s the moustache. Given a chance to showcase his abilities Plugg can show off his moves. He’s athletic. 1994 was a time where Bob Holly was better known as a flier; it was a size thing. Of course he later piled on 80lbs of muscle and stopped using the ropes. He wins here with a high crossbody, almost accidentally rolling through it was as close as South got to getting a move in.
Final Rating: ½*

Video Control does a bunch of shilling concerning SummerSlam and the Taker-Taker match. Don’t worry folks, it’ll all be over soon.

Bam Bam Bigelow vs. Gary Sabaugh
Bigelow is in the Million Dollar Corporation so DiBiase (on SummerSlam shill duty) segues straight into this. Sabaugh is the guy who looks like Garry Shandling. JR has a factoid for us; Sabaugh is the world spaghetti eating champion. Did he make that up? I can tell Sabaugh is Italian because he has ITALY on his tights. Although if he was REALLY Italian it’d say “Italia”, surely? Bigelow does a moderate amount of jobber murder but also throws in a chinlock. 1994 doesn’t have much jobber killing, It’s an upsetting trend. Shandling hits harder, which is probably an error on his part. Bigelow debuts the Million Dollar Bulldog to finish.
Final Rating: ¾*

Post Match: JR gets time with Ted DiBiase. Ted promises a big announcement this weekend that’ll “rock the foundation” of the WWF. WCW Monday Nitro used to have two or three of those a week. Tatanka comes out to demand Ted tell the truth and accuses Luger of selling out. Of course it was Tatanka who sold out, which was a case of “he who smelt it, dealt it”. DiBiase puts $10k up that says Tatanka can’t beat Nikolai Volkoff on Raw next week. Ted DiBiase’s closes with the *trademark cackle*. Tatanka came off as a personality void here and has done every since he cut that impassioned promo on Raw about his heritage and the sacred feathers. That was the high tide.

Most Entertaining: Randy Savage. I’ve been meaning to praise him for weeks in the awards section and he deserves some love here. He’s been a consistent performer on the announce table during 1994, regularly outshining the wrestlers he’s commenting on.

Quote of the Night: “That’s a variation of a wrestling hold I never heard of.” – is there any limit to Randy Savage’s insanity?

Match of the Night: Diesel vs. Lex Luger. The marquee match will almost always win this. Diesel and Luger delivered a decent match. No complaints.

Summary: Seeing as this Raw had to follow the epic from last week it was never likely to measure up. Bret and the Kid set the bar really high with a great match. This show sits in its shadow. The focus is hugely slanted towards the Million Dollar Corporation and while the “will he turn?” angle with Luger was the most entertaining thing Lex did, after the bodyslam on Yokozuna, the DiBiase heavy shows don’t work for me. Like Bigelow: the Bammer had a fun dynamic with Luna, they split them up and now he’s just another face in the crowd. He won’t do anything of note until January.
Verdict: 30