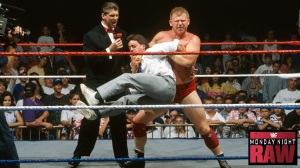 Arnold Furious: We’re in Lowell, Massachusetts. This is the same taping as last week so this show is OVER a month old. Vince goes right into clips of Tatanka’s embrace of capitalism. If he wasn’t a terrible heel the angle would have been cool. Hosts are Vince McMahon and Randy Savage. The latter never expected Tatanka to turn and decrees that’s he’s “100% befuddled”. They run down the card. Luger, interview with Backlund, Droese-Lawler.

Lex Luger vs. The Executioner
“The Executioner” hails from “Parts Unknown”. I’d love to visit Parts Unknown. There must be wrestler statues on every corner. This Executioner looks less mobile than Gill so it’s probably his tag team partner, Barry Hardy. Luger isn’t as popular as he was earlier in the year, because the fans have given up on him. An unmotivated Luger is a horror show, although he does opt for a few inside cradles at speed. Luger seems to enjoy mowing down the Executioner and hitting the power moves. Considering how little he does, it’s an ok performance. The “Rebel Rack” finishes thus placing this match squarely in the post-SummerSlam space where they tried to get “Made in the USA” Lex Luger over as a “rebel”. Nothing says rebellion like patriotism.
Final Rating: ¾*

Jerry Lawler vs. Duke Droese
Lawler grabs the mic to accuse Droese of being a trash-eating stinkbag, or words to that effect. “Some say he’s the underdog. I say he’s the overdog” – Randy Savage. Vince calls Droese “relatively inexperienced”. Compared to Lawler? I think that’s a given. Lawler started wrestling before Droese was born. I’m not exaggerating that either. Seeing that Lawler is a believer in stalling and Droese doesn’t know how to push situations, it ends up being a dull affair. Lawler takes a few bumps but spends more time complaining of illegal punches, hair pulls, tight pulls, the crowd, etc. “He’s got something up his sleeve and it’s not a bicep” – Randy Savage. It’s a foreign object, which he uses to smack Droese in the jaw. I’m getting serious déjà vu; I’ve seen this Lawler match before. Many times. Flair wrestled the same match over and over again too but his match was good. Lawler is one of the guys who can stall defensively and offensively. It’s a gift. Droese fails to recognise the set up for the piledriver and falls over. That’d be his finish, Duke! Lawler gets the piledriver at the second time of asking but bails for the trashcan, only to find Dink inside. Lawler gets squirted and his obsession with beating up a midget gets him counted out. Like Droese’s gimmick, this one stank.
Final Rating: ½*

The Heavenly Bodies vs. Mike Bell & Steve King
JIP thanks to an ad break. When we return Del Ray hits a northern lights suplex. The Bodies, sadly sans Cornette, put a beating on King with suplexes. When King gets a sunset flip an agitated Del Ray clocks him with a vicious clothesline, a series of a chops and a picture perfect dropkick. Del Ray was an underrated guy. I always enjoyed watching him. Pritchard in; DOCTORBOMB! Del Ray finishes with his slightly weird looking moonsault. I don’t agree with James that it was bad, he just did it with an incredible amount of snap so it looked too fast. Anyway, this being the Bodies, it’s the best match on the show.
Final Rating: *½

Interview Time: Vince has Bobby Backlund for a chat. Vince reminds Backlund that he was a sporting champion in the past but his recent failure to unseat Bret Hart as WWF champion shows that he isn’t that good anymore. Backlund claims he’s not a former champion. He’s cognisant that he’s superior to the plebeians. Bob goes off on one about how much he hates modern society. “I used to love you, but you changed”. Oddly enough Bret Hart would cut an extremely similar promo three years later when the WWF landscape had changed again. Backlund says he didn’t use the chicken wing when he came back because he didn’t want to offend the fans with his violent ways, but they deserve to be offended. He refers to Bret as “the man with the belt” and himself as “the champion”. If Bob didn’t ramble so much this would be a good promo. He makes good points but they’re buried among a sea of nonsense. He tells us if anyone ever escapes the crossface chicken-wing, he’ll retire from wrestling. Backlund challenges anyone to escape the hold and poor little Lou Gianfriddo, a PNG, jumps in there for a demonstration. Backlund breaks the poor guy in half and throws him around like a rag doll while Vince screams “let him go” and tries to separate the hold. The refs jump in there and eventually Savage manages to get Bob off. Backlund just demonstrated the next degree of jobber murder: non-wrestler murder. A Terry Funk speciality from the 80s. Vince McMahon’s reaction made the segment, as he was so concerned for poor Lou’s safety. It only would have been better if Backlund was bleeding all over Gianfriddo at the time. You don’t know where I’ve been, Lou, you don’t know where I’ve been!

Sparky Plugg vs. Richie Rich
Yeah, they’ve named a jobber after a comic book character. The weird thing is, he’s not blond or anything, or young. He’s a bald guy in generic black tights. Plugg is introduced as “Thurman Sparky Plugg” but Vince calls him “Bob Sparkplug Holly” during the match, suggesting there had been a gimmick tweak between this being filmed and Vince recording the commentary a month later. Holly gives Rich nothing and finishes with a high crossbody.
Final Rating: ¼*

Yokozuna vs. Phil Apollo
Phil Apollo was the subject of e-mails after The Raw Files: 1993 as it occurred to me that his name changes from Phil to Bill Apollo. It’s not just us mishearing the name either, as it occurs on the onscreen graphics. Not that the WWF ever gave a shit about their jobbers, with Vince regularly getting their names wrong. He doesn’t care much about this bout either and spends it chatting to Savage about Twiggy, the forthcoming WWF tour and a 40-foot inflatable Undertaker he’s just bought. Savage just about gets in the USA movie shill before the Banzai.
Final Rating: ¼*

Next Week: tag champs in action, Bulldog on King’s Court, Tatanka in action and an update on Lou Gianfriddo.

Most Entertaining: Bob Backlund. I know James doesn’t care for him, and I can see why, but he was tremendous on this show. Yeah, his promo was an ambling mess at times, but he got his points across and then legally killed a writer. As a writer I probably shouldn’t be so supportive, but sometimes we just have to take our licks. I would wager I’ve been chopped by more workers than you, dear reader. Unless you happen to be a wrestler. In which case, kudos.

Least Entertaining: Yokozuna. His plodding matches have become so much of an afterthought that the announcers don’t even pay attention to them.

Quote of the Night: “I used to love you, but you changed” – Bob Backlund, the cagey veteran, lays into the modern audience.

Match of the Night: The Heavenly Bodies vs. Mike Bell & Steve King. Anytime the Bodies are wrestling it’s a good night for wrestling.

Summary: Most of this show is a waste of time but the Backlund stuff is gold. A real show-stealing piece of sportz entertainment to get over the CFCW as a devastating submission hold. The way Bob threw poor Lou Gianfriddo around the ring was sickening, but in a good way. Heel Bob Backlund was an anachronism in 1994, but you could argue the same for Bret Hart in 1997 and he set the world on fire that year. Trailblazin’ Bob; “Attitude” three years early.
Verdict: 36