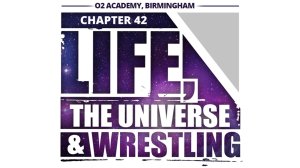 Arnold Furious: January 15, 2017. We’re in Birmingham for Progress’ first show in the Midlands. I managed to score tickets to this one and was there live. On paper the card was a little underwhelming but Progress have a delightful habit of turning underwhelming cards into amazing shows. Jim Smallman introduces us to the show and the crowd are rowdy, which makes him happy. He also chats about being on the WWE Network in a suit and how many tweets he got about wearing a suit. He further addresses the issues caused by WWE running in the UK by pointing out they’ve got loads of mates in WWE. Cue Finn Balor music.

Promo Time: Finn Balor
This was basically a trade-off with WWE for them using all of Progress’ top tier (Midlands) guys in Blackpool the same weekend. A make-good to ensure the first Birmingham Progress event wasn’t a calamity. The crowd chant “you’re just a shit Jordan Devlin” at him for chuckles, following Devlin getting stick in Blackpool the night before. Finn is here to compete…in a game of musical chairs against four fans. The music played is Shawn Michaels entrance music “Sexy Boy”, which is in no way weird. Finn almost loses in the first round with Paul Lee (@Paul_dtp_666) getting eliminated and this draws a bullshit chant. Wrestling! Martin Bentley (@themib) goes out second and we’re left with Balor and two others. Finn gets caught doing the HBK strut and pose and gets eliminated next. Some lad named Tom wins. To be fair he looked like the most athletic individual.

The London Riots vs. Ringkampf
Walter has always been a babyface in Progress so it’s a little jarring to see him switched heel with Axel and the crowd are into Ringkampf and their jaunty classical music. The alignment is probably due to the crossover work Progress are doing with wXw in Germany where Walter is one of the companies leading heels. Hosts on commentary tonight are Callum Leslie and Matt Richards. Dieter is the smallest man in the match but he’s so technically able that it’s not an issue. The rest of the match is big burly lads bashing each other about and hitting silly dives. It’s great fun. Walter is especially energised with his heavy hits. His shotgun dropkick is badass and a lariat he hits on Big Rob is the most violent thing on the show. Walter absolutely destroys Rob with takedowns before submitting him with a sleeper. Shame the ring positioning didn’t allow the Bully Choke to work the first time but a great performance from all these guys.
Final Rating: ***3/4

Sebastian vs. Jack Sexsmith
Sebastian is still the ‘go to the bar’ champion. He’s usually in a buffer zone between something good and the main event but here it’s a good switch of pace after a strongstyle opener. Jack is an undercard hero and comes out here wearing Ugg boots. He introduces Seb to one during the ring announcements, a throwback to Brixton when Pastor William Eaver knocked Seb out cold as soon as the match started. Eaver is in Sebastian’s corner, which is the main storyline. It’s about Sexsmith having to overcome the odds and Eaver having to deal with his internal conflict. Seb is his usual self, although he shows slight signs of improvement like the dropkick through the ropes, which is harsh as fuck, and the extra twist version of the Killswitch. Sexsmith overcomes the odds and hauls Seb into the Crossface, complete with condom in the mouth, in a truly disgusting yet innovative spot. Nice revenge match for Sexsmith and now the story is back to Seb-Eaver.
Final Rating: **1/4

Jimmy Havoc vs. Tommy End
Tommy, on loan from WWE ahead of his match in Blackpool later, is the second surprise of the evening. Due to Tommy wrestling later in the evening this is very brisk. They get in some tidy hard-hitting action during this sprint, which End is great at, but even by sprint standards it’s on the short side. Havoc finishes with the Acid Rainmaker and we hit the intermission.
Final Rating: **1/2

Natural Progression Series IV
Alex Windsor vs. Livvi Grace
I’m all for women’s wrestling. I generally love the switch of gears and the way it makes the show feel more inclusive and important. However if someone isn’t good enough to be on this level of show then they just shouldn’t be on here. I said that about Kyle Ashmore when Progress used him too early and the same is true of Livvi Grace (who I’ve seen work several times as Tennessee Honey). She’s attempting moves that are beyond her and someone is going to get hurt. When they stick to basics the match is completely fine. However when they attempt anything more complex the whole thing just unravels. It starts with ring post spots on the floor, which are ill-advised and poorly executed. It progresses with strikes in the ring that are badly timed and awkward. Not all of the match is bad, I hasten to add, but the bad stands out. The one spot, with Livvi on Alex’s shoulders, before falling off into what’s supposed to be an armdrag is Botchamania material. Every now and again I’m reminded of why both of them are here and it’s generally when they work the mat. However when they transition into bigger moves it doesn’t flow at all. The crowd are polite, as they usually are at Progress, but another major botch draws minor abuse. I’m not even sure what the move was so I can’t explain it. When you make a mistake it generally triggers more issues and that’s the case for other problems that arise here. Most importantly Alex falling over during the final submission finish just before Livvi dramatically taps out. So yeah, this was bad. I’m sure both women will come back and have better matches. I’ve seen enough from them to know that’s true but they need to know their boundaries and work within them. There’s nothing wrong with reaching for the stars but you have to be realistic.
Final Rating: ½*

South Pacific Power Trip vs. The Origin Banter Edition
The normally heel Origin lads are over because of the banter and come out here slapping hands and raising thumbs. Dave kicks off by saying he went a bit far in calling Dahlia Black names, due to her alleged sexual promiscuity. Dave kicks off his in-ring by putting on a mask and doing lucha and he’s shockingly great at it. Joel Allen decides to slam Dahlia because he’s a big beefcake who can do that. The match is pure comedy, which Travis is hugely underrated at. He may be the best comedy heel in the business. It’s not entirely goofy because they do still hit spots but they don’t bother with tags and just run through one daft thing after another. The bit where Ligero kicks TK in the balls with Dahlia’s leg is classic banter. It ends surprisingly quickly with SPPT overcoming the banter and double teaming, triple teaming if you include Dahlia, for the win.
Final Rating: ***

Paul Robinson vs. Rockstar Spud
I knew I wouldn’t like this match and it’s nothing to do with Robinson, who is a credible heel and a great character. However Spud doesn’t do anything for me and never has. That said he knows his way around entrance music and comes out to “Living on a Prayer” by Bon Jovi. That’s a banger. He’s also gone and got Progress specific gear, which would be a nice touch if I didn’t think he was sucking up to the fans like Cody Rhodes. This is his first match for Progress and it helps that he’s in his home town. The structure of the match is to try and generate as much heat as possible by having Robbo dominate. It’s a very one sided competition. Which worked when Robbo was putting a thrashing on Chuckles Mambo. It doesn’t work here though. Spud just takes a shoeing and it’s dull. Or occasionally disgusting. The finish is incredibly flat after Spud mounts a brief comeback and Spud wins on DQ after a low blow. Spud celebrates like he’s achieved something other than getting beaten up for ten minutes. I really wasn’t into this at all.
Final Rating: *1/2

Progress Atlas Championship
Rampage Brown (c) vs. Matt Riddle
Rampage’s Open Challenge antics come back to bite him because Matt Riddle is out to add a strap to his resume. Rampage has held this title since Brixton and has successfully defended against Mikey Whiplash, Bad Bones and Dave Mastiff. Riddle has only won one singles title before, the Monster Factory belt, but this is generally due to him only starting to wrestle in 2015. In a night of brisk contests this match is another for the catalogue. Riddle’s offence tends to be explosive and so is Rampage’s so it suits them to hammer out a sprint. Rampage has a size advantage, which shows when Riddle actually hurts his foot kicking Brown in the chest. He has plenty of other weapons though, aside from strikes, and part of Riddle’s appeal is how quickly he’s developed as a worker and added to his repertoire without losing the appeal that his MMA work brought in the first place. His strike rush is terrific but there’s more depth to his game. Rampage brings a lot of power in response but Riddle isn’t overwhelmed by it unlike other challengers. Matt goes to the ground and pound and Rampage stays down without being hit by a big move, more a succession of strikes, in an innovative finish.
Final Rating: ***3/4

Summary: All hail Matt Riddle. He’s stepped into the void left by the departure of Chris Hero to the WWE, as Hero did himself when AJ Styles left the Indies. Obviously he’s not on Hero, or AJ’s, level just yet but he has only been wrestling for two years. Give him another two and he’ll be a world beater. He can walk into Titan Towers any time he wants and sign a lucrative WWE deal but he wants to fine-tune himself first. He’s making massive steps every time he wrestles, learning to work different opponents and control different situations. The undercard was as patchy as you’d expect from the announced card but the surprises elevated the live experience from Finn’s appearance at the top to End to Riddle in the main event. The other match worth checking out is the opener with Walter re-establishing himself in Progress with a dominant display. Glad to see him back.
Verdict: 58