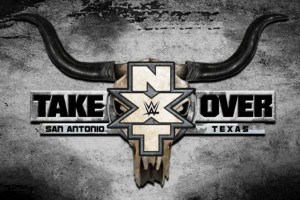 Tye Dillenger vs. Eric Young
Tye is over huge with the Perfect Ten gimmick and I’m confused as to why he’s gotten no discernable push in NXT whatsoever. As soon as that “TEN” gimmick caught on he should have been pushed hard. With EY, I’m glad he’s been given something to do as all the former TNA boys are struggling to differentiate themselves. With SAnitY there’s at least something different happening. I also approve of Big Damo’s re-branding as Killian Dain. It’s weird that Eric is backed, entirely, by European wrestlers. I’d be fully in favour of Tommy End kicking Young out of his own stable and turning it into a filthy Eurograps ensemble. SAnitY play the numbers game and somehow Young isn’t disqualified for all the heels running into the ring during the match. At least Tye gets the clean win with the Tyebreaker and the visual pinfall, even though SAnitY cheat to keep EY alive. Tye comes across like a genuine star and has the presence of one right up until Young pins him, which is a great move for SAnitY but not for crowd reactions. Personally I think Tye has been treated horribly during his time in NXT. If this is it for him and he’s away to the main roster I wish him all the best.
Final Rating: ***1/4

Andrade Cien Almas vs. Roderick Strong
Roddy is probably too good to be jobbing around in NXT. However he’s so good that he’s one of the guys who can get over someone who’s struggling like Almas. For what he lacks in adapting to American wrestling Almas certainly has the personality to succeed as a heel. It’s almost ridiculous that they tried him as a face first. Presumably because he’s so devastatingly handsome. They tell a tidy story with Strong going after backbreakers and Almas using innovative lucha counters to avoid more of them. Almas really ups his game here, backed into a corner by Roddy’s violence. I love a hard-hitting match and this is that in spades. Roddy survives being kneed in the face and hits the Sick Kick for the win.
Final Rating: ***3/4

NXT Tag Team Championship
#DIY (c) vs. The Authors of Pain
This is a major challenge for Gargano and Ciampa. Authors of Pain have looked good in short matches but have yet to be tested in a major match. The champs tell an intriguing story where they try different tactics to take over the match. Whether it’s technical wrestling, countering, quick tags or hitting and moving. It’s really well done as they try such a range of tactics but nothing works. The match slows down with AoP actually take over on offence but because it’s a long match they’re not their usual aggressive selves. Everything has to slow down and it removes a lot of what makes AoP fun to watch. Ciampa gets all fired up with German suplexes and that shows a crack in AoP’s gruff exterior. If you’re running the ‘Road Warriors’ gimmick you can’t show much ass but this is enough, to show they’re human. It opens the window of possibility. The biggest shock is that this is a great match. It relies heavily on #DIY and their workrate and creativity but AoP are no slouches. They do fine work in running their big spots and having the champs make desperation escapes. The double submission spot is a nice call back to Toronto and #DIY’s title win. This time it doesn’t get the job done. AoP power out, avoid the double strike and bully Ciampa into the pin. This was shockingly high-quality and it’s Authors of Pain first truly great match. I’ll need to see them wrestle other teams at this level to be convinced they belong here but it takes two (or four) to tango.
Final Rating: ****

Promo Time: Seth Rollins
“Show’s called Takeover right? Well I’m taking over”. He gets a huge pop for coming out of the crowd, grabbing the microphone and calling Triple H out. It was only a matter of time before main roster feuds crept into NXT and I like how this was presented. The crowd do too, which is a good sign. Wouldn’t it be weird if Hunter forced Seth to wrestle in NXT for a while?

NXT Women’s Championship
Asuka (c) vs. Nikki Cross vs. Peyton Royce vs. Billie Kay
The money match here is Asuka vs. Nikki but putting the two Australians in here allows us to tease that match without delivering it. Nikki Cross looks totally nuts. I love her character. She’s easily the best character in SAnitY. The two Aussies help each other out but even that’s no use against the skills of Asuka. It’s Nikki who takes it to Asuka and their sequences are a delight. Cross even lays Asuka out with a neckbreaker off the apron. The Aussies remove Nikki from the match though, ending the best part of it, with a suplex off the announce table. This allows them to double team Asuka. The Aussies don’t take advantage and Asuka kicks them both in the head to retain. Peyton eats the fall but it could have been either. I thought Peyton looked the better of the two Australians in personality terms and for work.
Final Rating: ***

Video Control takes us ringside where UK Champion Tyler Bate is seated. That’s not the money shot though as behind him is Matt Riddle, wearing a Progress scarf, giving the thumbs up, bro.

NXT Championship
Shinsuke Nakamura (c) vs. Bobby Roode
Roode is over on entrance and music alone. Tonight he’s not accompanied by a choir but he does have eight valets. Eight! Nakamura is relatively low key by comparison. My expectation levels are quite low for this because Nakamura has been coasting a little in NXT and Roode doesn’t do much for me. We were debating Roode in the office and the general feeling is that he’s a vessel, largely empty coming into WWE, and has allowed himself to be filled with WWE ideas. There’s no baggage here, which is why he’s been so successful. I don’t buy into Roode besting Nakamura in a straight up fight so they wisely create injury angles to sell the match up. Nakamura does good work in selling the shoulder but it doesn’t really impact the match. The match picks up when Nakamura stomps the piss out of Bobby and catches him with a flying armbar. This is the match I wanted to see. Roode running largely generic heat wasn’t. Nakamura injures his own knee doing a flying knee on the apron and that changes the match. Nakamura generally doesn’t sell his knee, even if it’s been worked over, so this is a change of gears for him. It’s interesting that it happens on an offensive move and looks like a fluke. The match from then is totally different with Roode destroying the knee in brutal fashion. It helps massively that Nakamura sells everything and even looks like tapping out. Roode can’t get a submission but the Glorious DDT finishes and Bobby takes the title.
Final Rating: ***1/2

Summary: A rock solid outing from NXT. I probably went into this Takeover at my least hyped for a major NXT show but it did deliver. Especially in the tag title match, which blew my expectations out of the water. I should probably never forget that whoever is competing on NXT is young (mostly) and hungry and want the exposure. That’s as true here as on any other show they’ve put out.
Verdict: 92