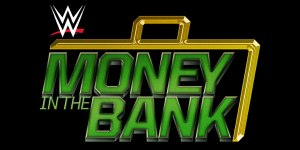 Women’s Money in the Bank Ladder Match
Charlotte Flair vs. Becky Lynch vs. Tamina vs. Carmella vs. Natalya
Some solid advice from one of the fans; “Climb Faster”. Carmella has a distinct advantage as she’s got James Ellsworth at ringside. She is the only one with help. The match is billed as a ‘historic first ever’ women’s MITB match. Which would mean a lot more if the belt they’re looking for a shot at was so unestablished. It didn’t exist at the start of last year.  Part of what makes the Money in the Bank concept so important is that it virtually guarantees you a world title. Which is tough to attain in the business. The structuring is always going to be tough because none of these women have been in anything like this before. The result is a lot of awkwardness, nasty looking bumps and overselling. Oh and glacially slow climbing. The do pander to the fans with traditional ladder spots, which somehow feel fresh because it’s women that are taking them. There are some gutsy bumps in there. Nobody phones the bumps in. Tamina and Carmella don’t take good bumps but they don’t phone them in. The match has definite car crash appeal. Charlotte and Becky are the stand-outs. Both in terms of the bumps they take and the spots they execute. The finish is so bad it’s untrue. James Ellsworth climbs the ladder and drops the briefcase down to Carmella. What? How must Carmella feel about that? It screams ‘we don’t trust you to climb up a ladder’. Worse still is this historic first ever women’s MITB match was won by a man. You couldn’t make this up. Do WWE not realise that goes against everything the Women’s Revolution was about?
Final Rating: **1/4

Video Control takes us backstage where Lana is interviewed regarding her title shot. Which makes the last match a laughing stock (which is already was) as Lana has virtually no wrestling experience and already has a title shot.