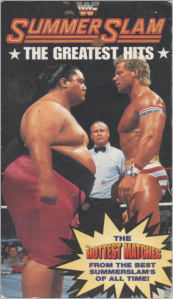 WWF Championship
Yokozuna (c) vs. Lex Luger
We begin with Vince McMahon’s attempt at reinventing Lex Luger as an All-American hero in the hopes that he would finally become what many with the pro wrestling industry had pegged him to become, namely “the next Hulk Hogan.” Luger, fresh off a run as the ultra arrogant ‘Narcissist’, had bodyslammed Yokozuna on board the USS Intrepid aircraft carrier-turned National Historic Landmark/museum on July 4th to set Luger up as a stars and bars bedecked, flag-waving patriot. Vince then shoved Luger in a custom built bus and sent him on a promotional tour of America on the “Call to Action Campaign”, attempting to drum up support for his SummerSlam ’93 battle with America’s greatest enemy: obesity. I mean, Japan. Or both in Yokozuna’s case. Nationalistic pride in wrestling in such a strange thing because either you tap into real world politics and end up with an influx of Russians during the Cold War or another Sgt. Slaughter Iraqi sympathiser debacle which inevitably appears tacky and exploitative, or you have to manufacture your own conflict like the USA vs. Japan issue here and it ultimately fails to resonate. I mean, SummerSlam‘s whole theme that year was essentially “USA is A-okay!” but there wasn’t any overt sense of patriotism sweeping the nation at that point, so the whole thing is really just an exercise in futility. Add to that the WWF’s continued growth outside America, particularly in Europe, and you’re alienating a lot of your audience, at least to an extent.

But there are far greater problems with the match than all of that, namely McMahon’s refusal to actually pull the trigger after he’d loaded the gun. Booking genius that he is, McMahon in the build up to the show had advertised the fact that contractually, Luger had one shot and one shot only at Yokozuna’s title, and wouldn’t receive another should he fail. Luger himself all but guaranteed victory, like any good American would, saying he wouldn’t need any more than one title shot to get the job done. And then Vince had the bright idea to hold off Luger’s win until WrestleMania X, so his new megastar could win the big one at Madison Square Garden on the biggest show of the year. It’s really too bad he only came up with that plan after the SummerSlam match was announced, because it necessitated an ending in which Luger left the Palace without the WWF title. Yes, he still won the match, but he won it on a count-out after decking Yokozuna with a forearm that it had previously been established contained a steel plate as a result of a motorcycle accident. What an All-American Hero, eh?

For anyone who had been following Luger’s career prior to the WWF, they knew him as a guy who couldn’t quite make it when it came to establishing himself as the top guy. For years he’d attempted to win the NWA World Heavyweight Championship from Ric Flair and time after time after time, he’d came up short. Now, even with the WWF marketing machine behind him, he’d failed yet again. And to really hammer home what a colossal blunder had just been made, the lack of a title change is ignored as Luger, Randy Savage, Tatanka and the Steiner Brothers celebrate a great victory for the United States under a sea of red, white and blue balloons, as confetti falls from the ceiling. No wonder the rest of the world view Americans as a caricature of arrogant, bombastic, overblown loudmouths when that kind of celebration greets such a dismal failure. Then again, perhaps the celebration was in recognition of the fact that what looked on paper like it was going to be a rotten match actually turned out to be something of a minor miracle.
Final Rating: **¼

The Undertaker vs. Kamala
Far be it for me to sound crass or anything, but is this SummerSlam’s Greatest Hits or SummerSlam’s Lamest Shits? Really, this is the sort of match that has absolutely no business being anywhere near something labelled “greatest”, but then such were the politics of the WWF’s insistence on only including current stars even in its retrospective features in those days. Seeing the Undertaker ride to the ring on the back of hearse in front of an 80,000+ strong crowd at the old Wembley Stadium is certainly a spectacle, but the action itself is typical ‘Dead Man’ ploddery, and the lousy disqualification ending, brought about when Kamala’s hander Kim-Chee (Steve ‘Brooklyn Brawler’ Lombardi) jumps into the ring to save Kamala from a tombstone piledriver, is just plain insulting, even if it did lead to the eventual introduction of the casket match into pro wrestling’s vast landscape.
Final Rating: DUD

WWF Intercontinental Championship
Mr. Perfect (c) vs. Bret Hart
An all time classic. Can anything more be written about this match that hasn’t already been committed to the printed page? Perfect was entering the match with bulged discs and a broken tailbone, and had actually already entered an unannounced retirement a couple of months earlier, returning for one last match to drop the title to Hart, who was in reality both one of his favourite opponents, and one of his best friends. Like Perfect, Hart was an exemplary second generation performer, though the similarities seemed to end there. Perfect, under his real name Curt Hennig, had already held the World Tag Team and World Heavyweight titles of the AWA before becoming a two-time WWF Intercontinental champion. Hart on the other hand had had to pay his dues as one of a number of battling brothers in his father Stu’s Stampede Wrestling outfit up in Canada, and had for a long time struggled to get noticed in the WWF before finally hitting the map as one half of the Hart Foundation. With Hart’s singles push on the ascension and Perfect staring down the barrel of a life outside the ring, what looked on paper to be an already significant title change instead became an absolutely spectacular passing of the torch moment for Hart. The fact that Perfect even clambered into the ring that night given the immense pain he was in already, said a lot about how highly he regarded ‘the Hitman’. The icing on the cake was the fact the match was so damn great. Aside from a rushed ending in which referee Earl Hebner called for the bell as quickly as possible after Hart had trapped Perfect in his Sharpshooter finishing hold (a conscious effort by Hebner to avoid having the hold do any further damage to Perfect’s already fragile back), those without the knowledge of the injury were unable to tell there was even a problem at all. In the years since, Hart would claim the he felt like he and Perfect had many matches together much better than they did here, often on untelevised house shows seen by just a few thousand fans in the arena that night, and in fact, the pair would go on to assemble another classic in the semi-finals of the 1993 King of the Ring tournament after Perfect returned to action following his injury woes. Many claim the 1993 bout was even better than this entry into their series, a technical marvel unhindered by an unhealthy performer, but by far this was the more pivotal, most important, most well known and most widely seen outing the two had with one another. Not only that, but the Intercontinental championship was also at stake, a secondary title generally regarded in contrast to the WWF Title as the belt usually awarded to workhorses of the promotion. From names like Tito Santana to Randy Savage, from Ricky Steamboat to Mr. Perfect, and now the flame was handed down to Bret Hart over the course of 18 impeccable minutes. If pro wrestling is truly an art form, this match is one of its masterpieces.
Final Rating: ****½

Razor Ramon vs. Ted DiBiase
This was DiBiase’s WWF farewell as he’d quit the promotion in order to salvage his marriage, feeling that regular trips to All-Japan for three weeks at a time would be offset by the fortnights he’d be afforded to spend at home, as opposed to the WWF’s rigid touring schedule of constantly being out on the road, leaving most guys feeling lucky if they could get just a couple of quality days at home each month. And with his gigantic run as ‘The Million Dollar Man’ coming to an end, DiBiase does the honours by going out on his back, passing the torch to rising star and new babyface Ramon in a pretty decent, if slightly disappointing match. At less than eight minutes, it’s more of a whimper than a bang that DiBiase goes out with, and in a match with as little time as this AND on pay-per-view no less, it’s pretty unforgivable that he has to resort to planting on a chinlock at one point. To be fair to him, he was pretty badly banged up by that point, although maybe he just got into those bad habits having spent so much time teaming up with IRS. The Razor’s Edge finishes for the ‘Bad Guy’, and that’s it for DiBiase’s in-ring career in North America. Over in Japan, he’d be reunited with his former partner Stan Hansen, and the duo would win the All Japan Unified World Tag Team Championship from the Holy Demon Army of Akira Taue & Toshiaki Kawada on September 3rd. However, after vacating those titles so they could be decided in the prestigious World’s Strongest Tag League tournament, DiBiase would suffer serious back and neck injuries in his and Hansen’s first tournament bout against Tracy Smothers & Richard Slinger, sending DiBiase into an early retirement that, unlike so many other professional wrestlers, he never came out of. That did however open up the door for him to return to the WWF in January, 1994, where he replaced the departed Bobby Heenan as a colour commentator, before becoming a manager.
Final Rating: **½

Summary: This tape is a failure. Yes, it contains one all time classic match, but what does it really have to offer outside of a rehash of bouts any WWF tape collector will have already amassed? Nothing, because the title promises SummerSlam’s “greatest hits”, and these certainly aren’t it. As a “sampler” of sorts I suppose it’s okay, but where is Bret Hart vs. Bulldog? The Hart Foundation vs. Demolition? The Hart Foundation vs. The Brain Busters? Alright, that sounds more like “The Best of Bret Hart at SummerSlam” but if you’re promising greatness, you damn well better deliver it. Source the title change elsewhere (it’s on plenty of DVD releases in superior, non-erosive digital quality), collect all the SummerSlam pay-per-views if that’s your thing, and don’t bother with this waste of time at all.
Verdict: 49