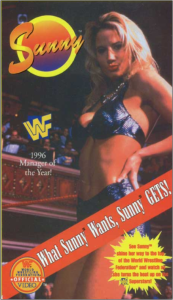 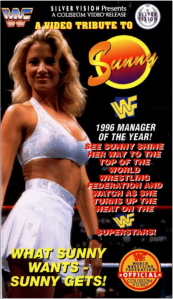 James Dixon: Sunny presents this, and says that she made a New Year’s resolution to make as many people happy as possible. Well, from the backstage stories I have heard over the years, I think we can safely say she managed that!

WWF Tag Team Championship Tournament Final
The Bodydonnas vs. The Godwinns
Sunny is in the corner of the Bodydonnas. This was the final match of a tournament to crown new tag champions, with the belts having been vacated by the Smoking Gunns after Billy Gunn badly injured his neck. The Bodydonnas defeated the Bushwhackers and the thrown together pairing of Razor Ramon & Savio Vega to reach the final, whereas the Godwinns overcame the New Rockers and Owen Hart & Davey Boy Smith. Both the fact that these two teams made the final, and that the match was on the pre-show, highlights was a disastrous state the tag division was in by this stage. The Godwinns come to the ring with Hillbilly Jim and a goat. The goat is probably a better worker than Jim. Why must every era of wrestling inundate me with big fat hillbillies lumoxing around the ring? Sunny has done nothing so far other than holler and bang the ring. To be honest, I would rather have watched an hour of Sunny dicking around on a beach than have to watch this match. Anyhow, is it not something of a cheek to charge for this, seeing as though it was available for FREE at the time, what with it being on the preview show? Generic action here, and the crowd don’t give a damn until Sunny flashes her ass at Phineas, in a direct rip-off of the finish in the main-event of SummerSlam ’88. Roll-up, new champions, the crowd continues to be apathetic. So am I; that was garbage.
Final Rating: ½*

Henry Godwinn and Hillbilly Jim can’t get into Phineas’ room because he has locked the door. Sunny strolls out, having presumably performed some sort of deviant sexual act involving a slop bucket and the goat from the last match.

WWF Tag Team Championship
The Bodydonnas (c) vs. The Godwinns
Six weeks later and we are in MSG for the Godwinns’ rematch. The story going into this is that Sunny is obsessed with the tag titles, and she covered her bases pre-match in the aforementioned segment, in case her current charges lost the belts. It rather gives away what is going to happen here doesn’t it? What a delight for us as well, getting to see the big epic rematch between these two teams that the world had been clamouring for since WrestleMania. Thankfully this is clipped, with Vince talking over the top, giddy about having booked Sunny to kiss Phineas. I’m sure the fans’ discussions over the water cooler the next day went something like: “The hot girl made out with the fat yokel!? Get me a ticket to the next show!” In Vince’s head they did, at least. The Godwinns win the belts, and tag wrestling is now in a worse shape than when the Natural Disasters won the titles. This tape has not started well.

WWF Tag Team Championship
The Godwinns (c) vs. The Smoking Gunns
This is from just a week later from the pre-show (again) of In Your House: Beware of Dog, with Sunny now in the corner of the Godwinns. The Gunns had been champions prior to this on a few other occasions. Billy Gunn would go on to hold the belts a number of times more, with various different partners. Bart Gunn would go on to be knocked out by Butterbean. None of this changes the fact that we are three matches in, and every damn one of them has featured the Godwinns. I have seen more of Henry Godwinn’s fat ass than I have of Sunny’s pert little number. That can’t be right. I really cannot express how much I detest the country bumpkin gimmick, and how tiresome and boring I find it. What was Vince’s obsession with the South, really!? Why is he so insistent on portraying everyone from there in such a negative light, and making them all into inbred morons? I think it is overcompensation for the fact that he really is a redneck at heart, and it is his way of distancing himself from it. There is no “wrestling” to speak of in this match, unless you count the plethora of armbars? Sunny shows the world what we all already know, that she is a slut, when she kisses Billy. Her distraction flusters Phineas and causes her charges to lose the belts. Sunny doesn’t care, she has struck a deal with the Gunns. Vince spent the entire match trying to shill the main PPV, ignoring the non-action in the ring. I don’t blame him, it was another Godwinns humdinger.
Final Rating: ¼*

In-ring interview with Sunny now, as she cuts an unintentionally amusing “shoot” style interview, saying she has done a lot of things she is ashamed of. Does she mean nailing Shawn Michaels backstage while her boyfriend was in another room? Oh no, she just wants to apologise to Phineas for treating him like a chump. He IS a f*ck*ng chump! She tells him some disingenuous shit about how she wants to start over with him, and he tells her he loves her. Wow, this is awful. Phineas walks into the trap that was obvious to everyone over the age of five, and Sunny slaps him when he comes in for a kiss. Sportz Entertainment at its absolute worst. Vince acts like it is the worst thing he has even seen. He is right in one sense. The Gunns attack Phineas after the slap, then Henry Godwinn and Hillbilly Jim make the save, and trap Sunny in the corner of the ring like a scene out of Deliverance. She inevitably gets a slopping. Cartoon silliness. Sunny complains back in the studio that she wanted that segment cut out of the tape. You introduced it, love! Drugs make you forgetful too, kids.

WWF Tag Team Championship
The Smoking Gunns (c) vs. Owen Hart & Davey Boy Smith
Sunny is now in the corner of the Smoking Gunns, as she continues to be passed around like Chlamydia. Which is ironic because… Oh, I can’t even be bothered. This tape has sapped the life out of me. This comes from September 1996, at In Your House: Mind Games, and break out the champagne, because they have made it to the main show! Clarence Mason comes to ringside for no discernible reason. GREAT! Just what we needed to help get things rolling. Mr. Perfect destroys his credibility by saying this will be a classic wrestling match. If I sigh any more watching this tape, I might pass out. This starts fairly quickly, with Owen and Davey getting the better of the early exchanges. Both teams are heels at this point, but Davey and Owen play babyface due to the presence of Sunny at ringside with the Gunns. Owen takes Bart down with a chop block, and they go into working a heat… which is just ass-backwards. What kind of formula sees the same team do the shine and the heat!? I expect better from Owen and Davey. I have to point out Jim Ross’ absolutely excessive over-reaction to Owen doing the chop block. He rants about how some find it unethical and not politically correct. Pardon? Did he whip out a pistol and shoot him in the leg? No, he did a bog standard CHOP BLOCK! There was something in the water in mid-96 that made almost everything the WWF did completely useless. Vince shows his own ineptitude as a commentator by calling the Smoking Gunns’ Sidewinder finisher a “sidewalk slam”. Jim Ross is quick to correct him. That doesn’t finish things due to interference from Mason. Well, at least he did something. The Gunns end up working a heat of their own on Davey, who mounts his own comeback and pins Bart with the powerslam to win the belts, after some shenanigans involving Billy and Sunny. Post match, Sunny berates the Gunns and fires them. Tragically, this is the best match on the tape so far by a long shot, but still completely worthless due to the weird psychology.
Final Rating: *¼

Sunny is amused by Billy Gunn chasing after her, and says maybe he should go back to his wife. Well goddamn, aren’t we the little hypocrite?

WWF Intercontinental Title Tournament Final
Faarooq Asad vs. Marc Mero
This is from the night after Mind Games, and is the final of the Intercontinental title tournament, the belt having being vacated by Ahmed Johnson after Faarooq attacked him and injured him. Faarooq beat Savio Vega and Sid to get this far, whereas Mero defeated Steve Austin and Owen Hart. Pat Patterson, the first ever IC champion, is the referee. Sunny is in the corner of Faarooq, who is her new singles charge, and Sable is in the corner of then husband Marc Mero. Pleasingly we are joined in progress, as Sunny gets ejected from ringside. Well, this was a fine choice for inclusion wasn’t it!? The WWF was all over the place in 1996, with titles being vacated, and strange choices progressing in the subsequent tournaments for those belts. Mind you, if this was Ron Simmons vs. Johnny B. Badd then I would be far more interested. Mero is a strange one, because he was a good flyer and did exciting moves, but he still managed to be boring. He had no idea how to play his character, because he was trained by WCW to be Johnny B. Badd and that was all he knew. Sunny returns to ringside and gets into a catfight with Sable, which ends with slaps for both. Mero takes advantage in the ring and hits the shooting star press to win the belt. Other than the opener, what we have seen is Sunny’s charge lose EVERY match, usually with her being to blame. What a cracking person to have at ringside! She is a curse, says I!
Final Rating: *½

And now, the joys of a feature that sees Sunny getting ready for Shotgun Saturday Night. We are introduced to Jill, who does Sunny’s make-up. They warmly embrace, for a little longer than friends do, and look deeply into each other’s eyes. Wow, Sunny would really go with anyone huh? Sunny tries on a few outfits. This went NO-WHERE!

Summary: Has there ever been a more redundant and worthless tape than this? Sunny was over enough to deserve a profile, sure, but because she was hot, not for anything she ever did at ringside. Thus what results here is a collection of tag matches from a lower card storyline (most of the matches didn’t even make it past the PPV preview show) during one of the weakest periods for doubles action in company history. This is horrendous viewing, just a slapped together piece which barely even features the subject at hand. I guess that is the problem when you produce a wrestling tape about someone who doesn’t wrestle. Avoid!
Verdict: 5