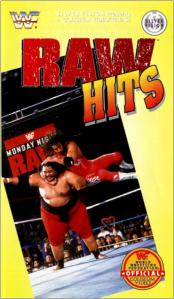 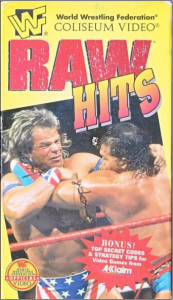 Arnold Furious: It didn’t take the WWF long to capitalise on the success of Raw and realise the superior quality of prime-time matches could be turned into a series of tape releases. They put out Raw Prime Cuts and it was brilliant, taking the best of a strong show both from a match and storyline perspective. The storylines weren’t quite so hot around the time of this follow up, Raw Hits, but the matches were still golden. Host here is Stan Lane. It’s the same set up for most of the 1995 releases, with him standing in front of a green screen and occasionally interjecting with a few comments. I liked Stan much more as a wrestler than as a commentator/presenter. He must have agreed as his commentating/presenting career was relatively short.

WWF Championship
Bret Hart (c) vs. 1-2-3 Kid
This match is genius. Both guys are over huge as babyfaces. Kid has an enormous underdog vibe about him, so while the crowd are thrilled he’s got this match they know full well he’s got no shot at winning. The aim of both wrestlers is to turn Kid’s “no shot” into a credible contest. I love how Bret sells the first armdrag takedown; he’s floored and gives it the old “well, how about that?” eyebrow raise. They rock a few friendly back-and-forth counters, with Kid making sure he doesn’t give Bret time to raise his eyebrow a second time. As soon as Kid gets an advantage, he lays in the big kicks. Bret spent most of his 1994 summer battling Owen Hart, so he’s used to a smaller more aerial based offence and it’s an ideal time for Kid to wrestle him. Bret gets SERIOUS after taking a few of those kicks and starts smashing Kid with forearm uppercuts, rocking his head back with a few of those. Bret was working light to begin with, but as soon as Kid became a legitimate threat, he started treating him as such. Bret generally didn’t work stiff, but he knew how to make something look stiff. Kid knows how to sell like an underdog too, just hanging on for dear life before taking another enormous shot. Normally Bret can’t bully his opponents because he’s not a big guy, but this shows what Bret matches would be like if he’d been bigger. It’s still technically good, but Bret is vicious with it. Kid finds himself wrestling extremely defensively, which is normally the case. The crowd are starting to buy into his resilience as Bret is just beating the piss out of him and can’t get the pin. Kid has done his homework and gets a boot up to block the second rope elbow, one of the patented Five Moves of Doom. Bret’s a good sport about setting Kid up as a threat, and eats a couple of huge kicks, including Kid’s back kick right on the mouth. Kid starts using his body as a weapon as it’s all he can do, so he hits a moonsault block and a powerbomb sets up a leg jam. Kid throws Bret outside to try and hit something huge but Bret counters the plancha. Kid still has bags of energy, but Bret dodges the cannonball. Bret makes the mistake of hooking the Sharpshooter near the ropes, and naturally Kid reaches them to break it. Bret goes to a superplex only for Kid to counter in mid-air into a near fall and the crowd bite on that one. They’ve made Kid a believable threat; he’s stuck in there and he’s battling for everything. Kid tries for a missile dropkick but gets caught in the Sharpshooter and he has to quit. This is a must-see match because you rarely ever get to see Bret bully someone smaller than him. It’s a fine showcase of how talented he was at telling different stories and wrestling different matches. They built the Kid’s threat around his strengths; flying and kicking. He came close enough for the crowd to buy into it but not close enough to make Bret look bad. The result is a classic underdog versus champion match, like Rocky Balboa’s first shot at Apollo Creed. And like Rocky Balboa, Kid lost.
Final Rating: ****¼

The British Bulldog vs. Shawn Michaels
This was right after Royal Rumble ‘95 where Shawn and Davey were numbers #1 and #2 and went all the way through the match, only for Shawn to survive a trip over the top rope and win. Shawn is still heel despite the popularity of his Rumble win. Davey beats him from pillar to post with Shawn throwing himself around. Shawn could take a beating. Shawn goes after the leg but gets battered again and takes another huge bump to the floor. There are times when Shawn’s selling is a perfect foil for a big powerhouse babyface. It’s perfection here, every bit as good as Flair at his peak. Shawn bails to confer with TACTICAL MASTERMIND Sid. He must give good advice because Shawn jumps back in and takes over with a short arm scissors. But Davey just jacks him up out of it, OVER HIS HEAD, and slams Shawn down. Now that was impressive. Bulldog gives him another pasting and surfboards the poor bastard. Davey tries to hurl Shawn out of the ring only for Sid to catch him, throw him back in and Shawn gets a splash for two. Davey takes over yet again and Bulldog has kicked the shit out of Shawn Michaels during the course of the match. Just absolutely beaten the hell out of him. It has been glorious. Shawn’s offence wasn’t great until he turned face later in the year. He tended to run too many rest holds, generally to try and stop himself turning face. Of course he threw everything at Diesel at WrestleMania and promptly got cheered. Sometimes heels have to be a little bit boring, unless you’re the Brain Busters, then you can just do anything you like and get heat. So Shawn’s offence consists of chinlocks and sleepers.. now that would be Sid’s advice. If Shawn hooks a bearhug then you know it’s Sid. Davey mounts yet another shitkicking of Shawn, this time pressing him groin first onto the ropes. Shawn positions the ref so Sid can beat on Davey. That doesn’t get it done, so Shawn Superkicks him for the duke. He was just starting to use that as a finish. This match was great. I love watching Shawn get his ass kicked and Davey was phenomenal when he had someone to bump at pace for him.
Final Rating: ****

Steel Cage Match
Lex Luger vs. Tatanka
This is right before WrestleMania and the culmination of their feud. The main issue the feud suffered from was both guys’ inability to play their roles. Luger was indifferent to being double crossed and showed no emotion whereas Tatanka had no idea how to be a heel and also showed no emotion. The result is both guys have to rely on their technical skills, of which they have little. They’re both smashmouth kick and punch “Main Event Style” wrestlers. The whole match is just kicking, punching and the occasional power move. They might as well not be in a cage. It doesn’t feature at all. Neither wrestler can really tell a story either. When Tatanka goes up top to leave the cage, it’s just to set up him being thrown off the top. Luger finishes with a diving forearm smash. The match was fairly energetic but utterly pointless. At least it was short. It can’t stop this tape’s momentum.
Final Rating: *

WWF Women’s Championship
Bull Nakano (c) vs. Alundra Blayze
Bull beats on Blayze like she owes her money. Vicious hair mares, lariats and even a legdrop looks harsh. Nakano straps on the ankle pick half crab, a slight variation on Shamrock’s submission and cranks that bitch. Alundra comes back with babyface flying and nice hair attacks. That is until she miss-times a spin kick and back elbows Bull in the nose. That looked really painful. Nakano gets a receipt by elbowing Blayze in the jaw. Blayze responds with the German suplex and Nakano kicks out! That was her finisher! Another German suplex and Bull kicks out again. They were peaches too. Nakano tries for a tope but eats floor. Blayze with a German suplex on the floor!!! Holy f*ck! Finisher on the floor and how long is Nakano down? Well, a little while as she’s planted there, but as soon as she can regain her feet from over her head it’s on again. Bull misses with a moonsault and Alundra finishes with her fourth German suplex. Holy f*ckb*lls. This match was only about five minutes long but it was awesome! It had stiff striking, crazy submissions, sick bumps and multiple false finishes. IN FIVE MINUTES. There was no selling, at all, but they only had five minutes and it was a big title switch. Oh, it’s a wonderful, wonderful world. This might be my favourite WWF women’s match, ever.
Final Rating: ***¾

Bret Hart, 1-2-3 Kid & Bob Holly vs. Owen Hart, Yokozuna & Hakushi
The faces try to isolate Yoko. That works out about as well as you’d expect. Holly and Hakushi run a fantastic sequence at speed that has me begging for a singles match. They had one on Action Zone, which I’ve not seen. They tag out and the match gets better because it’s to Kid and Owen, who have amazing chemistry. Kid and Hakushi is great too. They should have just kept booking Kid & Holly against Owen & Hakushi. It’d never get boring. Bret has to pair off with Yoko and seems sick of the enormous fat boy, because he doesn’t bother giving him anything. He just lays him out and then puts a beating on Hakushi too. This is a couple of weeks after Bret beat Owen in a No Holds Barred match and Owen was really starting to job a lot. Here Bret dropkicks him into Holly, who rolls him up in one sequence for the win. I’m disappointed the match was so short because everyone seemed on, yet what they did do worked. Practically any combination in singles (barring Yokozuna) would have been gold. Ditto that on straight up tags. This is the start of Camp Cornette’s run of awesomeness. Sadly Hakushi wouldn’t get to hang around with Jim and the boys.
Final Rating: ***¼

Summary: Get all of this! You’ve got Waltman’s title shot, which has the feeling of a special match and delivers on its promise. You’ve got Davey Boy putting an enormous beating on Shawn Michaels, with HBK getting the ever-loving shit kicked out of him for the entire match. You’ve got Alundra Blayze trying to kill her own finisher and Bull Nakano beating the hell out of her for it. You’ve even got a six man tag featuring two WWF champions, three great workers besides that, and Bob Holly stealing the show. I loved every minute of this tape and marked out all over the place. It’s just one of those glorious tapes that deserves attention. In terms of match quality it might even edge out Raw Prime Cuts, which is also a fantastic tape. Highest recommendation.
Verdict: 100