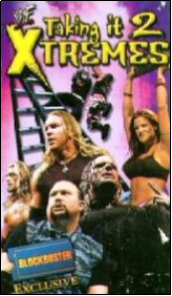 James Dixon: “This video is not really about tables, ladders and chairs”. No, it is about ripping customers off, because it is just a re-cut and reduced version of the TLC Tables Ladders Chairs tape that the WWF already put out. As you can see, they didn’t even change the opening voice over! This kind of thing became commonplace with Coliseum Home Video releases in the early 90s, but I thought those days were behind us now, fool that I am.

We start with the Hardys and their pretend wrestling company that they used to have in their house growing up, footage we have seen more than anything else on releases in this volume. By my count that is an astonishing four tapes that have this on them! We then cut quickly to the Dudleys talking about how they broke into the business, and the same again with Edge & Christian. It’s all just the exact same stuff as in the TLC tape, but with large chunks cut out to make what’s being said less relevant and interesting.

The main difference between this and the aforementioned release is the quality of the tape used. It is absolutely deplorable. So bad in fact, that at times the picture is almost unwatchable. One example is when highlights are shown of the Hardys on RAW in 1994, which looks so overexposed and grainy that it is almost like watching white noise. Don’t think that it is because the tape has been watched so many times or anything like that, because this is a brand new video. If I was viewing this for anything other than review purposes, I would be livid.

It seems almost pointless going over what the contents of this offering are, because I have already gone over it in detail on the TLC tape, and I am loathe to repeat myself. It’s just a far shorter, far poorer quality version of that. It harks back to some of the releases we came across in The Complete WWF Video Guide Volume #3, where tapes would be released with chopped up cut and paste footage from prior releases, with incredibly lazy editing from Coliseum Home Video that would result in the graphics and commentary from the original source being retained, thus confusing and confounding viewers when what appeared on screen didn’t match up with the tape they thought they were watching.

One thing I will say is that this was originally a Blockbuster exclusive in the United States, and intended as a teaser of sorts I guess, but why does a 55-minute video need a 35-minute version!? It’s like releasing a movie with a chunk of it cut out, filming it off TV with a cheap camera from the 80s and then giving it a completely different name and claiming it is a whole new movie entirely.

Hang about; new footage! At the end they have tacked on a few extra comments that didn’t make TLC, from Jerry Lawler (wearing an XFL shirt) and Jim Ross (speaking only in his idiosyncrasies and catchphrases), as well as Bubba Dudley saying TLC at SummerSlam 2000 can’t be topped. Well, there was TLC II at WrestleMania X-Seven but it is down to personal taste whether you think it is better than the original.

Summary: A deplorable release, cashing in on the popularity of the guys involved and of the spot matches they were doing. I would have loved to have been in the room when they were discussing this tape at one of the merchandise meetings, because I can’t even imagine the pitch. I guess it was: “Hey Vince, you want to make some extra money by re-cutting a release we put out a few months back and putting it on super cheap, low quality tape?” “Sure pal, let’s do it”. Don’t even consider getting this in order to expand and complete your collection. Leave a gap, you will feel less violated if you do.
Verdict: 0