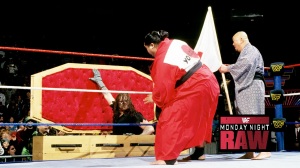 Arnold Furious: We’re in Richmond, Virginia, with this show being taped after last week. We open with footage of Jannetty and the Kid taking the tag team titles last week. The re-match is actually going out live tonight in MSG, which is kinda weird. Hosts are Vince McMahon and Angry Generic Heel. Oh wait, that’s Crush, brah. Sorry, brah, didn’t recognise you through the blandness.

Owen Hart vs. Terry Austin
This is during the reconciliation period before Owen’s heel turn at the Rumble so Bret corners his brother. Austin is a slightly doughy looking guy who can’t take bumps. After a monkey flip goes badly awry, Owen resorts to sitting in an armbar. Best to play it safe. They try to run the mirroring, but Austin can’t even get in place for a monkey flip let alone do it. Austin finally takes a bump correctly off a hip toss, but celebrates too early and botches his bump off an armdrag. Owen is way too generous and even gives Austin a heat segment, albeit short, before the enzuigiri. Not content with that Owen continues to run through spots, dragging Austin through a recovery segment. We WILL have a passable match, you useless bastard! When Owen’s content he’s dragged enough reasonable bumps out of Austin, ‘the Rocket’ finishes with the Sharpshooter. Owen deserves special praise here for dragging Terry Austin out of negative stars. He was a shambles. Vince quizzes Owen after the match on who he favours in tonight’s MSG tag title match up. Owen dances around the question but wants the Quebecers for the belts at the Rumble. The WWF insist on blaring Owen’s entrance music over the interview so hardly a word can be heard and Bret has to lean in to understand. Vince tries to shill the Rumble hotline but is again drowned out by music.
Final Rating: ½*

Tatanka vs. George South
South looks like a biker from the 60s. He makes the mistake of demanding a chopfest with Tatanka, which is sure to rile up the Injun blood. Stan Lane calls in with an update from MSG, which is drowned out by the terrible audio. He’s watching the tag title match, which is now commencing. South, meanwhile, is busy taking cagey veteran bumps that look more intense than they actually are. Tatanka chops him a lot before finishing with a diving chop off the top rope. He sure loved chopping. Tatanka hooks the leg, because he respects the veteran.
Final Rating: ½*

Video Control gives us some footage of WWF Women’s Champion Alundra Blayze. Nice to see they didn’t forget the title existed. According the video, Alundra enjoys boxing and jet skis. I feel more informed about her already.

Promo Time: Yokozuna and Mr Fuji
…Where the hell is Cornette? In Japan apparently, doing a news conference over there. That makes no sense at all. I know they can’t say he’s working back in his own promotion, but Japan? That was their best excuse? Anyway, the interview is as bad as you’d expect until Paul Bearer pushes out the new doublewide (patent pending) casket. Yoko goes to trash it, but Undertaker jumps out. Typical nonsense for this feud. Luckily the Undertaker is about to ascend into the heavens, or take six months off, or whatever, at the Rumble. I’ll miss his jumping Tombstones on jobbers.

Diesel vs. Scott Powers
Shawn Michaels is out here with Diesel, which is disappointing as I’d rather watch Shawn wrestle any day of the week. The only circumstance where I’d want to see Diesel wrestle is if he was wrestling Shawn. Scott Powers is like a shitty Terry Taylor. The crowd have settled down enough for the commentary to be audible now, but that unfortunately means I can hear Crush, brah. Inside of a matter of seconds he says “brah” three times. It’s not just a meme, brah. Powers takes a bump about as well as Terry Austin, if he didn’t think he was Ric Flair. Stan Lane calls in LIVE to let us know that the Quebecers have reclaimed their tag team titles. Back in the pre-recorded ring, Diesel plods through the normal. Powers eats the big boot and Diesel finishes with a weak elbow drop. Diesel didn’t know what he was doing as yet. Shawn is more entertaining post match than during this whole bout as he steps on the fallen Powers while congratulating Dies and then steps on Powers again on the way back.
Final Rating: DUD.

Randy Savage vs. IRS
Savage is easily distracted by Crush on commentary, which allows IRS to jump him from behind and settle into the worst match possible; IRS heat. IRS cannot make heat interesting and Savage taking heat is Randy at his most disinterested. The Savage reverse squash formula is remarkably tedious. I’ve lost count of the sheer number of these I’ve seen over the years. 1993 was about the earliest that Savage started to have unwatchable matches. Savage manages a few clotheslines but an ad break eliminates the rest of his offence. Savage spends the entire match trying to fight out of IRS’ boring rest holds. At least they throw in a flash pin to mix it up. Savage’s decisions during the match rarely make sense although he’s nowhere near as lazy as during his WCW run. Savage is far more intense around Crush, brah, and they tease action before IRS hooks a lengthy abdominal stretch. I know this isn’t a short match, but IRS just constantly goes to rest holds. Maybe it’s the old school mentality that a heel should never be entertaining but IRS bored me to tears. Savage does his usual and slams IRS to set up the flying elbow, but Crush shoves him off the top for the DQ, brah. And that is a long way to go for that finish.
Final Rating: *

Post Match: Crush and IRS control the ring, as babyface midcarders try to save Savage. This brings Yokozuna in to confirm the heel domination. Lex Luger evens it up. Shawn and Diesel swing it back heel and Bret Hart runs in to save the day. The mini-Rumble closes the show.

Most Entertaining: Audio Control, for gleefully failing to control the audio levels in the first half of the show and letting the crowd, music and just about anything else drown out the terrible Vince and Crush announce team. Also Owen Hart.

Least Entertaining: Take your pick. Everyone else. Bar Owen.

Quote of the Night: “This is a big opportunity for me… and Bret also” – Owen just about remembers who he’s tagging with at the Rumble.

Match of the Night: Randy Savage vs. IRS

Summary: Well, this show sucked. Some of the jobbers were borderline incompetent and there were more blown spots than at a dog fellating competition. When the best thing on your show is Mike Rotunda grinding away at a chinlock for 15-minutes, then you’re in trouble. An early contender for the worst show of the year.
Verdict: 12