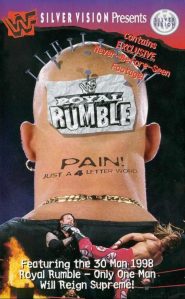 Arnold Furious: With 1997 in the can the WWF was about to take off. WCW had messed up their big 1997 feud, finally returning Sting to the ring to battle Hulk Hogan only to botch the match horribly. They’d also acquired the WWF’s champion; Bret Hart, but had no idea what to do with the hottest property in wrestling. At a point where WCW should have been able to hit cruise control and wipe the WWF out of existence, everything changed. WCW’s own greed and stupidity destroyed it from within and the WWF changed the rules. They spent a fortune on legitimising their new ace Steve Austin by having him interact with Mike Tyson and then began a mammoth owner vs. champion angle that consumed the following two years. The new fans that tuned in discovered the WWF had been busy creating new stars. They discovered the Undertaker wasn’t the man they remembered. That Shawn Michaels had evolved. They discovered Ken Shamrock, the Rock, Mankind, the New Age Outlaws and above all; Austin. Ahead of the 1998 Royal Rumble it was all about Austin. They’d deliberately tried to get all the other 29 guys against Steve to sway fan expectation by declaring him a “marked man”. Austin opted to go on the offensive by randomly attacking Rumble participants before they could attack him. “Do unto others”. Regardless, everyone still knew Austin would win the Rumble, because he was without a doubt the company’s biggest star and the future of the WWF. Vince deciding to go full-on with Austin marked the WWF turning the corner. A few months later they’d beat WCW in the ratings for the first time since mid ‘96.

We’re in San Jose, California. Hosts are Jim Ross and Jerry Lawler. The commentary team benefits enormously from shill man Vince being moved off announcing. We get a look at the WWF’s guest in the sky box; ‘Iron’ Mike Tyson.