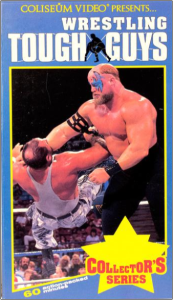 Hacksaw Jim Duggan vs. Boris Zhukov
We start in Glens Falls, New York, which is Duggan’s hometown. The match took place in April 1990, just a few days after WrestleMania VI, where The Bolsheviks got beaten in about 18-seconds by the Hart Foundation. Hopefully Boris’ form will continue and this will be short as hell. Which one is the “tough guy” in this one? Don’t tell me they mean that tongue-lolling goofball Duggan!? How unusual for him to be in a match against ethnics; he never plays the race card. Oh sorry, I must be thinking of a different Duggan. One who isn’t an ignorant xenophobe. I realise that Duggan didn’t book his own programs, but he played his gimmick in a way that leant itself to this kind of thing. I have no problem with the “evil foreigner” gimmick at all really, I just hate Duggan and his character. If a wrestler did that in Britain say, he would be a National Front supporting heel. Only in America does this gimmick work. This is Duggan-Zhukov, so I assume by now you know what that means: two dreadful workers, who have one wrestling move between them, doing next to nothing. Other than rest holds there have been no moves other than a few clotheslines from Duggan, though you can’t even really count them either because they are just wild arm flails in Zhukov’s direction. Zhukov is SO thick that he doesn’t see Volkoff throw in the 2×4 for him to use. Well, he deserves to get beat then. What a pile of dross.
Final Rating: DUD

Haku vs. Ronnie Garvin
We go to Madison, Wisconsin next for this match from May 1990. Garvin, I have a new respect for after seeing a few decent matches from him recently. Haku I always have time for, because he could really go when he could be bothered. It is quite an interesting match on paper actually. They trade locking up, before Garvin goes to the eyes and throws in a few shots, but a headbutt backfires. Babyface are so stupid. If wrestling was a real sport and you had scouted your opponent, you would know when studying Haku that his head is hard, rock hard, and that headbutts do not work. Why then, would you headbutt him? Or indeed punch him in the head? Garvin does both. He also looks a lot like Mr. Kennedy… Kennedy… They have a VICIOUS chop battle that reminds me of Kobashi-Sasaki, only far, far shorter. It is seriously brutal by WWF standards of the time. These two are just beating the piss out of each other and there has been little if any wrestling. Urgh, count out while they are brawling outside. Lame. The further chop fight afterwards though, is awesome. Worth seeing for the chops, but the match was nothing more than a fight.
Final Rating: **¼

The Bushwhackers vs. The Powers of Pain
This match also features on the Supertape video. This is from the Maple Leaf Gardens in Toronto, Canada, and it is August 1989. Talk about a styles clash; these two teams do not match up at all. I mean, obviously no-one matches up with The Bushwhackers, but this just looks ridiculous. If the POP sell a single move for the midgets, I will be appalled. I am hoping Barbarian busts out one of his sick clotheslines or boots in this, to at least make this match worth watching for SOMETHING. The Bushwhackers counter power with comedy, with Butch crouching behind Barbarian as Luke pushes him over. It’s awful. Luke sizes up Warlord, concerned at his size, but he just marches around the ring and goes to the eyes. They are very much playing this for comedy. Bearhug from Warlord, but Luke counters by biting his nose. Oh yes, that age old, tried and tested counter as made popular by Lou Thesz. The Bushwhackers wouldn’t know a wrestling hold if it hit them in their gurning, toothless faces. The POP show way too much ass in this one for a monster heel team. I am amazed they agreed to this. Barbarian rams Butch into the post outside the ring, and Warlord continues the assault inside. Barbarian comes in and hits a big boot to the face, and Luke’s attempts to save his cousin result in double teaming from the POP. Barbarian misses an elbow from the middle rope and Luke gets the hot tag, and uses his “innovative” offense to fire up on the Warlord. The Bushwhackers hit the battering ram on both guys, which causes Mr. Fuji to come in and then attack with his cane. This results in a DQ and a win for the Bushwhackers. Jesus, what was wrong with the WWF? Alfred Hayes is confused about the result, because he is a moron. He could have been a Bushwhacker; he has the intellect for it.
Final Rating: DUD

Hercules vs. Akeem
I have done this one before too, as it features on Supertape II. It’s fan favourites match, as the fan requesting it didn’t care for Akeem’s dancing. Though really, who did? It was like watching your Great Uncle Albert dance at a wedding after a few pints. Hercules uses his power to counter Akeem’s size, and sends him flying through the ropes after a big punch, and Akeem takes a bizarre bump. It is like watching Les Kellett… if he had eaten Big Daddy. Slick gets all riled up and tries to get in the ring to take on Hercules himself, but Akeem wisely stops him. I guess you have to respect Slick’s bravery, he was never afraid to pick a fight with people far bigger than him. Herc is too quick for Akeem, and ducks and dives, connecting with punches. I think that Hercules has really good punches. They are realistic looking and very unique in the way he delivers them. I am a fan. It is a shame that he doesn’t appear to have any other moves in his repertoire! Akeem mounts a brief comeback, but Herc takes over again. They do a cute spot where he rams Akeem’s head into the top turnbuckle ten times, and the momentum makes Akeem do it a few more times himself without Herc touching him. I have seen him do that spot before, but I like it. It always gets a reaction from the crowd. I don’t much care for the dancing out of the corner to sell it though. I am with the fan who requested the match on that issue. A knee lift finally takes Akeem down, as do a pair of clotheslines. As he is mounting a head of steam, Slick pulls down the top rope and sends Herc falling to the outside, right in front of the ref. We have a DQ win for Hercules. As usual there are afters, as Akeem goes for the 747 Splash, but misses, allowing Herc to impressively and effortlessly slam the big man. It was brief enough to not be offensive, but it was pretty much all punches and not much else. Akeem barely had any offense.
Final Rating: *

Dino Bravo vs. Tito Santana
This is the final match? What a dreadful tape this is. Did someone come up with the concept for this while sat on the can? “I know, let’s dedicate a tape to the guy’s who can’t work for shit! That will sell!”. No wonder it didn’t come out in the UK! Silver Vision were smart enough not to go anywhere near it. Have you ever seen Bravo break even 2*? Tito is great, but he can’t get that many snowflakes out of a lump of wood like Bravo. Doctors could prescribe Dino Bravo matches as a cure for insomnia. Hell, just saying his name is making me sleepy. They stall for a few minutes to begin with, and Bravo’s power is countered by Tito’s speed, as he hits a crossbody and dropkicks to send Bravo out of the ring. Rest holds are followed by armdrags from Tito, who goes back to an armbar. Bravo backs Tito into the corner and they exchange punches, but Bravo catches a monkey flip attempt and turns it into a reverse atomic drop Now a reverse chinlock, how exciting! Sean Mooney calls it a wristlock. A wristlock! A WRISTLOCK! There is no excuse at all for that. Bravo does a somersault plancha into a spinning powerbomb. Oh sorry, my mistake, it is just an interminable bearhug. Well, they are similar! This tape has been unbearable. I wasn’t even going to do it; there is a reason it was sat there unclaimed for so long on the pile of tapes in the office. Furious does stuff like Savage-Steamboat and Bret-Bulldog, and I do this pile of shit. To cap it all off, Bravo wins cleanly with a sidewalk slam. Tito tried bless him, but really, why even bother?
Final Rating: *

Summary: What a disgrace this tape is. It’s swift sure, which saves it from being the worst ever, but it ranks right up (or should that be down?) there. This was the talentless guys’ chance to shine, and hell, didn’t they put on a show? The only thing worth seeing is the chop fight in Haku-Garvin, but that far from justifies owning or watching this. The fact that this is the best match, should give you an idea of the truly horrific nature of it. Avoid it or you will go blind watching.
Verdict: 17